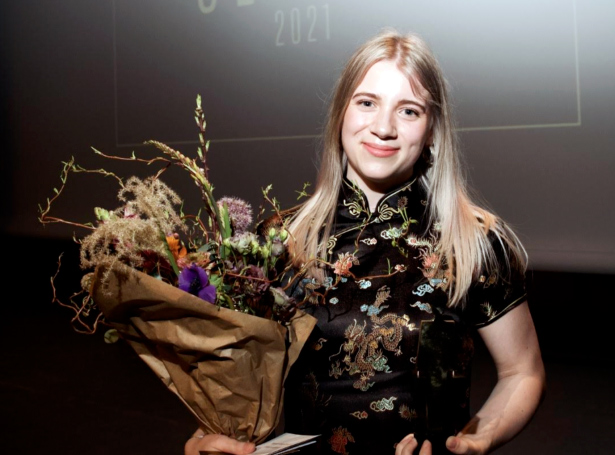 Faroese film awards show Geytin was held for the 8th time at the Nordic House on February 27th, this time with young filmmaker Barbara Lervig claiming both awards for her film ‘Handanland’ (in English: ‘Where Do We Go’) — that’s the Audience Award, worth 25,000 DKK (3,360 EUR) in cash sponsored by the Municipality of Tórshavn and the Geytin Award, which includes the traditional Geytin statuette as well as a 35,000 DKK (4,710 EUR) cash prize sponsored by the Municipality of Runavík.

Unlike previous years, this time around the awards show was broadcast live on TV, as health-related restrictions prevent the gathering of large crowds.

‘Handanland’ was Lervig’s debut as a director. Coincidentally, the making of the film constituted her final project at the Northern Film School in Leeds, England, where she studied cinematography.

She is the first female director to have won the Geytin award, and she was “very surprised” by the sudden recognition, she said in an interview with public broadcaster KvF’s news program, adding that she intends to direct more films in the future.

Dealing with difficult topics such as child loss and suicide, ‘Handanland’ was filmed in Faroese mountain environments.

“The winner of the Geytin 2021 managed to fascinate and gain the jury’s respect with their ambitious and heartfelt short film,” the award show jury stated. “As this is also the director’s debut, it is an especially bold move by the director to tackle such serious and existential questions which are difficult for even the most experienced of filmmakers. With this Geytin award, the jury wanted to acknowledge this courageous leap into filmmaking. This director has an exciting and hopeful future ahead of them, as does this new generation of filmmakers in the Faroe Islands.”

Nine short films were picked for this year’s Geytin awards:

The Geytin award is named for Herálvur Geyti (1914-1985), a man from Kollafjørður who was more commonly known as Geytin. In the 1960s and ‘70s he travelled around the islands to host film screenings in areas without a cinema.