While the World Googles, the Faroese “Sprota” 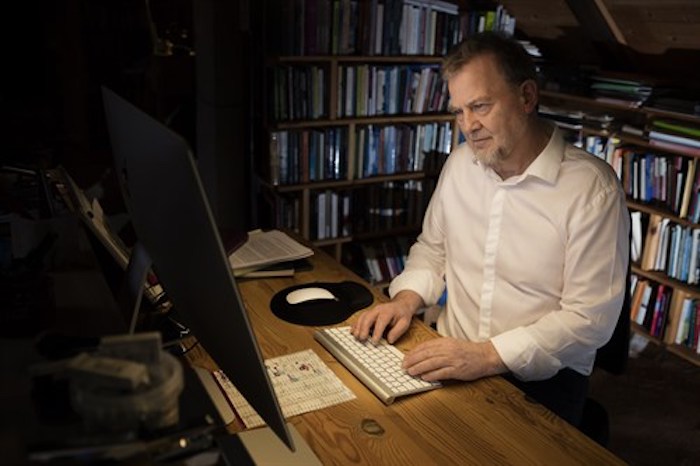 He is an impatient man, and not without reason. Jonhard Mikkelsen knows that only 90 years have passed since Faroese was allowed into the school house. And he knows it only takes a generation to demolish a language. Tirelessly he and his publishing house, Sprotin, have laboured to nurture the Faroese language. But not in the wildest and most impatient of his dreams, would he have imagined what would happen in the mere span of a decade.

“I am just a hopeless romantic,” he mutters as he welcomes me—probably commenting both on his immaculately kept garden that surrounds us and his life’s work, the publishing house Sprotin.

We enter the house, where a meal already stands ready. As we eat, he reminisces about the technological development over the past 25 years since Sprotin was founded.

– Sonja is amazing, both as a graphic designer and as a consultant. Contemporary graphic design is in her bones. One glance at our homepage, and you realise her unmatched eye for design. And she is up-to-date with all the newest online technology. She takes care of all that side of the business. I, together with others, take care of the words, the texts. But how the readers meet them on the page or screen, is all hers. There are five of us, though not all full-time, who keep the shop running—editing books, making them ready for publication, running an extensive translation service, nurturing the market and organizing events. And then there is an army of associates that help us with this and that.

Sprotin’s biggest success is an unlikely candidate, namely the publisher’s online dictionary. By now it is an indispensable tool for everyone who trades and dabbles in Faroese words. It has been so well-received by the country’s students and pupils that they have done what almost never happens in Faroese, morphed the name of a company into a verb. To search Sprotin’s online dictionary is simply called to sprota.

That it would become hip to use an online dictionary, no one would have imagined only 7-8 years ago. Then the budding online dictionary drove Sprotin to the brink of bankruptcy and Jonhard to the edge of madness.

To understand the drive behind the success, you must look just shy of a century into the past, when the authorities finally allowed Faroese within the four walls of the classroom. That was only the first victory in a long and hard fought battle to strengthen and nurture Faroese as a language of instruction. A crucial part of this linguistic integration was the publication of dictionaries—not a sexy endeavour, but a pivotal one.

Together with his colleague, Anfinnur í Skála, Jonhard published a major Faroese-English and English-Faroese dictionary in 2007. But who was going to haul two volumes of more than 2000 hardbound pages around in the digital age? If Faroese was not to be swallowed up in the online flood, a digital solution had to be found. And so the first seed were sown for an online dictionary platform.

Easily dreamed, tearing-your-hair-out-of-your-head difficult to accomplish. False starts and investments that nearly wiped Sprotin off the map was the story for several years. Even when the first edition of the current online platform was launched, only about 1.000 to 2.000 word nerds visited the site, and it was not easy to get subscribers. Then in 2010, when the Ministry of Culture and the municipalities took a subscription for all public schools, there was lift-off. From being the most unsexy thing you could do, Sprotin’s online dictionaries became an essential part of every student’s tool box. The dictionary platform had become so indispensable that when the ministry and municipalities decided not to renew the subscription in 2014, the students went to the barricades, boycotted lessons to fight for their right to … use a dictionary, to sprota.

Luckily a solution was found that gives everyone free access to this invaluable tool in the continuing battle to nurture a small language. As of now, the platform houses no less than 16 dictionaries with more to come. And it has been extremely well received. Today, about a third of the Faroese visit the dictionaries every week to look up a myriad of words. It has become sexy to sprota – no one wants to be caught dead having misspelled a word!