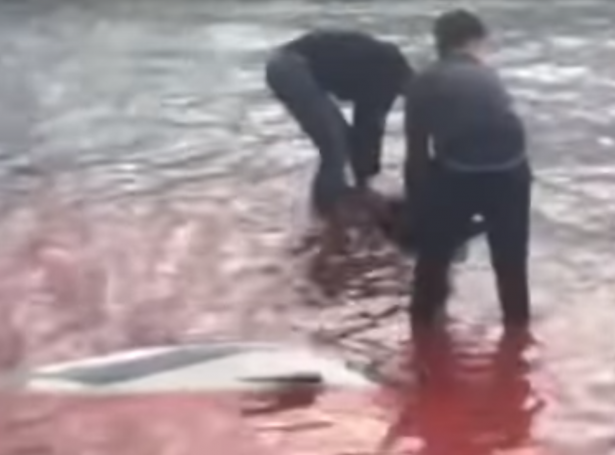 A video has emerged on Youtube of the September 11 slaughter of 210 white-sided dolphins, which took place in the village of Hvalvík.

The video was recorded by conservation society Sea Shepherd and has sparked international outrage as it depicts the mammals squirming for their lives along the shoreline.

The video has also sparked outrage as it, rather controversially, captures a man who spends several minutes trying to kill one of the dolphins by stabbing it with a knife – which is clearly against the law of whale hunting in the Faroe Islands.

According to the law of whale hunting, whales can be only be killed by using a ‘spinal lance’ that is inserted through the animal’s neck to break its spinal cord.

However, since the September 11 hunt Faroese authorities have not been able to identify the aforementioned man. The Sea Shepherd video appears very blurry and it is difficult to identify the people who appear in it. It is understood that no one in the Faroe Islands seems to know who the man in question is.

This has led some to believe that the stabbing of the defenseless dolphin was premeditated.

Local sheriff Karl Johansen, who had the primary responsibility for the September 11 dolphin slaughter, is one of those who holds this particular belief. He suggests that Sea Shepherd staged the barbaric killing – presumably to damage the country‘s international reputation.

Mr. Johansen told Faroese news website Dimma.fo: “There is a lot in this video that makes me astonished, and I highly doubt that it was a Faroe Islander who tried to kill that white-sided dolphin.”

He elaborated: “I find it odd that the woman, who was supposed to document the killings, went to the boathouses to live stream. Because the killing itself did not take place there. It took place at the mouth of the river and the bay-northbound. It is also where I and the leaders of the dolphin hunt were located.

I have asked a lot of people from the local area (Hvalvík and the surrounding villages), but no one knows these individuals who can be seen in the footage. It is weird. And the way the person behaves is also uncommon – quite literally un-Faroese. I have never experienced that a person who has not had the right equipment to kill a whale has continued to stab the animal for several minutes like that.”

Johansen concluded: “In this case we know that it was a member or representative of Sea Shepherd who recorded the video…and we know how this organization works.”

Previous article
“We have an idea of what we think the ultimate dining experience is,” says KOKS head chef
Next article
Faroe Islanders urge Iranian government to release four Christians