A new qualification tournament brings a new sense of optimism for the Faroe Islands national team. First up on the road to World Cup glory is an away trip to Chișinău to face Moldova. The only nation ranked below the Faroe Islands in the FIFA rankings in the group (currently placed 177, with Faroe Islands 107 at the time of writing). And probably the most realistic chance for the Faroes to grab an away victory in the qualifiers.

On the back of the nation’s first-ever competitive tournament triumph (with promotion from the UEFA Nations League D), Head Coach Håkan Ericson will hope to continue his impressive progression. And will aim for the Faroe Islands’ first away World Cup qualifying win since 2016 (against Latvia).

2020 was a year to forget for the Moldovan national side, with five defeats and a draw in competitive fixtures. And their last competitive win feels like a distant memory (against Andorra in June 2019). However, there is a newfound enthusiasm surrounding the country, with former Serie-A star Roberto Bordin’s recent appointment as Head Coach.

Sometimes rankings and recent form don’t tell the whole story, and this is true with Moldova, who, despite their recent slump and lowly ranking, still have several good players, which will make for a stern test for the Faroese side. Footballers such as national legend Alexandru Epureanu, Serie A regular Artur Ioniță, Olympiacos defender Oleg Reabciuk, and future star Vitalie Damașcan are all opponents to keep an eye on.

In truth, Moldova will also see this as the best opportunity to get back to winning ways and start the Bordin reign with success, so this should allow for an entertaining open match.

In terms of Faroese squad news, the nation is buoyed by the news that they have an almost fully fit squad to choose from for this first time in several years, allowing for a welcome selection dilemma for Håkan Ericson. And with the Austria and Scotland matches coming up on Sunday and Wednesday, respectively, the team’s rotation will be crucial to keep players fresh.

Many pending questions will be addressed by Ericson when he names his side, such as who is his number one goalkeeper? After so long without playing, can starman Jóan Símun Edmundsson walk back into the starting team?

With all this in mind, here is my starting 11 for the match against Moldova: 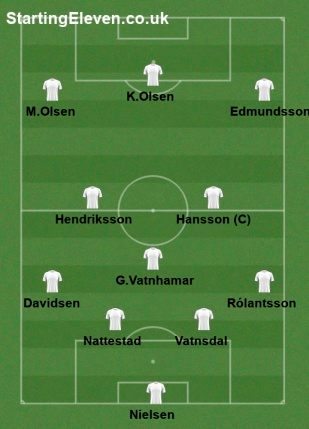 Despite Teitur Gestsson deputising impressively for the last five matches of the Nations League, I have reverted to the experience of Gunnar Nielsen. Gestsson performed admirably against low-ranking opposition, but I think Nielsen has the edge with years of playing against nations where his goal has been deluged with shots (something Gestsson hasn’t faced yet for the national team). And Nielsen’s slightly superior shot-stopping ability gives him starting jersey for the time being.

The defence almost picks itself, with Viljormur Davidsen being one of the nation’s most consistent players at left-back over the last few years, and the welcome resurgence of towering centre-back Sonni Nattestad giving the backline a much-needed injection of pace and stability, which was a glaring weakness in his absence.

The other centre-back role is not as straight forward with Odmar Færø and Heini Vatnsdal both capable starters. I gave Vatnsdal the role based on his superior ability on the ball, but the position can quite easily go to either player. Gilli Rólantsson made the right-back position his own at the backend of the Nations League fixtures and is worthy of retaining his place; his versatile in various positions could be vital for Ericson going forward.

Talismanic captain Hallur Hansson and playmaker Brandur Hendriksson outstanding partnership in the middle of the park was my highlight of the last campaign, and their performances are vital for a Faroese victory. In defensive midfielder, Gunnar Vatnhamar stepped up to the plate against Malta and Latvia in the last fixtures and fully deserves a starting spot against Moldova.

Meinhard Olsen has affirmed himself as a significant fixture of the squad over the past year with his high work-rate and impressive ability on the ball and could provide an interesting prospect on the left-wing. On the opposite flank, the return of key man Jóan Símun Edmundsson (first Faroese Bundesliga footballer) is a point of excitement for the Faroese public. It is hoped he can deliver his undoubted ability. And finally leading the line, Klæmint Olsen has cemented his spot up front, with four goals in the last calendar year, and as a result, he finished as the UEFA Nations League D top goalscorer.

Don’t be fooled by Moldova’s ranking or form; they will provide strenuous opposition, and the Faroe Islands will need to be at their best to achieve any positive result. The fixture signifies one step closer to the motherland of Qatar 2022; we can dare to dream. The match kicks off at 7.45 pm GMT tonight.