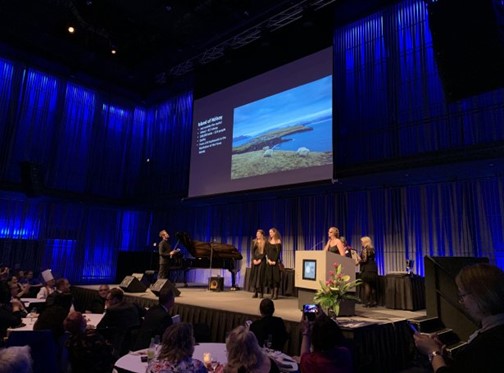 Gimburlombini were honoured as ‘Nordic Food Destination 2019’. The innovative and creative café on the small island of Nólsoy uses locally-produced resources in their food-making and include local villagers in their projects, creating a complete tourist experience, such as when tourists are invited to go foraging with chefs.

Grøna Oyggin, translated as ‘green island’, is a collection of farms on the island of Sandoy. Trailblazers in experimenting with Faroese vegetables using a specialised cultivation method for harsh environments, the farms have brought a great deal to the Faroese food industry, providing it with access to organic, Faroese-produced vegetables and functioning as an important part of the development of Faroese gastronomy. Grøna Oyggin won ‘Nordic Food Producer 2019’.

There were seven categories in total, each highlighting the ingredients, artisanship, communications and people involved in the world of Nordic food. The Embla Food Awards were launched by the six Nordic agricultural organisations in 2017 as a way of spreading knowledge of Nordic food. Their aim is to boost Nordic food culture and generate greater interest in it outside the region. The awards are held bi-annually.