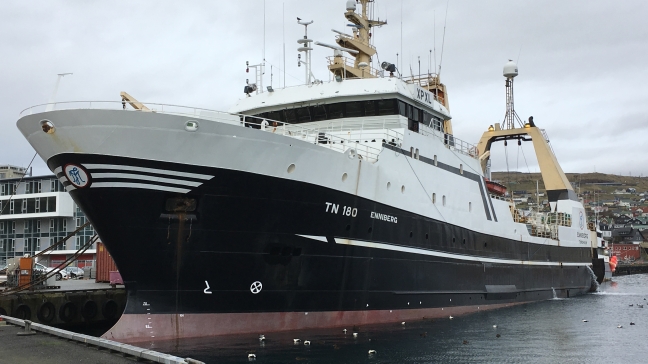 “If we have made a mistake, it will be rectified,” said Kaj Johannesen, who owns the trawler Enniberg, after it emerged that CCTV cameras are being used in the trawler’s factory.

According to Johannesen, Enniberg has been using CCTV cameras on the deck since the ship arrived here 28 years ago.

As CCTV cameras are believed to improve workflow efficiency, the ship’s foremen recommended that cameras should also be installed in the factory.

Johannesen said that only the captain and officers are allowed access to the footage, and that no footage is ever saved.

He added that if the shipping company has ‘made a foot fault’, as he put it, it will be rectified.

The Faroese Data Protection Committee cannot comment on the matter as it has not received any complaints, formal or informal, about the CCTV cameras in the ship factory. The committee will, however, investigate the matter.

The committee is authorised to start procedures on its own initiative.

It is illegal to install and switch on CCTV cameras without prior notification to the Faroese Data Protection Committee.

Yesterday, a member of the Enniberg crew, whose signature reads “one of more than 40 men who are under surveillance by P/F Enniberg”, sent a letter of complaint about the CCTV cameras in the ship factory to the Association of Fishermen, the Ministry of Fisheries and the media.

On January 24, when the crew signed on, CCTV cameras had been installed in various spots in the factory, including above the filleting tables and the packing tables.

The crew was not informed

Mortan Johannesen, the previous owner of Enniberg, told news portal vp.fo that CCTV cameras are used to give the captain an overview of onboard activities. He added that the required authorisation for using CCTV cameras is on its way.

Jan Højgaard, the head of the Association of Fishermen, said that he wrote to the Data Protection Committee this morning requesting that the CCTV cameras be removed before Enniberg’s departure tomorrow.

Rógvi Reinert, the Permanent Secretary of the Ministry of Fisheries, said that he will look into the matter.