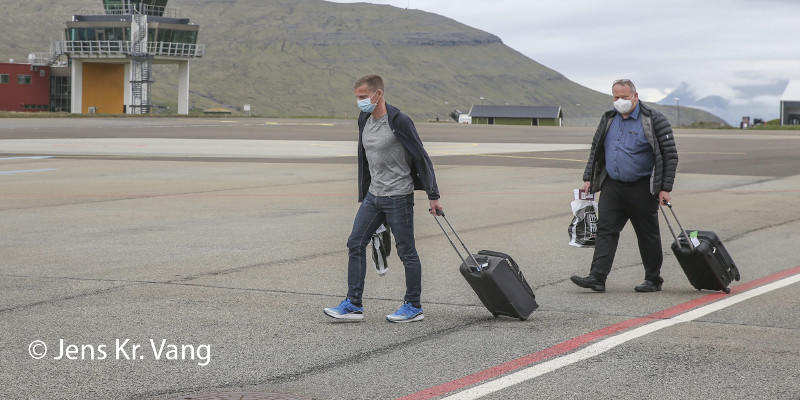 Earlier this week, a traveller at Vágar Airport refused to get tested for COVID-19.

Since 27 June, testing for COVID-19 upon arrival in the Faroe Islands has been mandatory for every person above the age of 12.

However, the necessary approval from the Data Protection Authority of the Faroe Islands, had not arrived by the time the first plane landed at Vágar Airport on 27 June. For that reason, those in charge of the testing could only recommend that the passengers get tested, and six passengers ended up declining the offer, some because they had already gotten tested elsewhere.

The approval arrived later that same day, and since then, every traveller above the age of 12 has been required to get tested upon arrival.

On Thursday, 2 July, however, one of the passengers who arrived at Vágar Airport refused the test, and according to Pál Weihe, the medical professional in charge of the COVID-19 tests, it is up to the police to handle things when that happens.

The police, who are not able to comment on specific incidents in this case, tells Portal.fo that in the case of an epidemic such as this one, they have the authority to “detain them by administrative means”. They can place people in quarantine (in this case Hotel Vágar is intended for this purpose), and it is then up to the chief medical officer to determine if the person needs to get tested. The person being detained then has the option of filing an official complaint.

On 5 July, the Faroe Islands announced its first COVID-19 case in over two months – a traveller, who had been tested at Vágar Airport. Whether the person is a native or a tourist is unclear, but according to the chief medical office of the Faroe Islands, there is a possibility that this could be an older infection, which still showed a positive test result. He tells Kringvarp Føroya that the person has been tested for antibodies against the virus, (something which every traveller who tests positive will be offered) and if this test comes back positive, it is safe to assume that they cannot pass the virus on to others.