HomeBusinessTidal 'kite' technology to be installed in Faroe Islands
Business

Tidal ‘kite’ technology to be installed in Faroe Islands 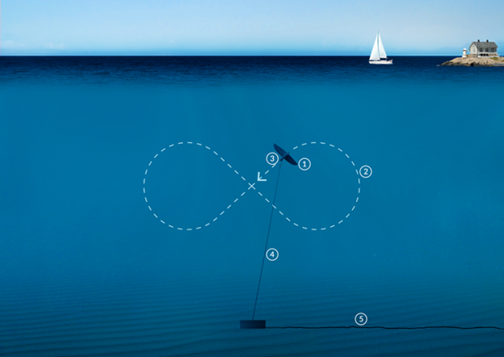 Energy harvested from the ocean is considered renewable and abundant. This has led to a recent agreement between Swedish marine energy company Minesto and Faroese national electricity company SEV that will deploy tidal kite technology in the oceanic waters around the Faroe Islands.

Minesto’s technology, called Deep Green, harnesses underwater current, which creates a hydrodynamic lift force on its wings, pushing it upwards. A rudder steers the kite in a figure of eight trajectory and as it “flies”, water flows through the turbine, producing electricity.

“As a remote island society, we don’t have the option of buying electricity from neighbouring countries,” Hakun Djurhuus, says CEO of SEV. “For the last year, we have carried out tidal stream measurements, as tidal energy at the right cost level can be one important piece of the puzzle.”

The agreement encompasses the installation, commissioning and operation of two of Minesto’s DG100 models. Weighing between one and two tons, the DG100 model has a wingspan of four to six metres and a power rating of up to 100 kilowatts.

The first unit is to be installed at the end of 2019 or beginning of 2020, while the second will be installed in 2020. A site for the installation of Minesto’s technology has been identified in Vestmannasund, a strait in the north west of the Faroe Islands.

SEV has also committed to buying the electricity produced by the technology through a power purchase agreement.

According to the European Commission, ocean energy could potentially contribute around 10 percent of the European Union’s power demand by 2050.

The Faroe Islands is one of the world’s leading nations in producing sustain­able electricity, with over 50% of the nation’s electricity deriving from re­newable energy sources. The Faroese Government and SEV have set a goal of 100% green electricity produc­tion by 2030.