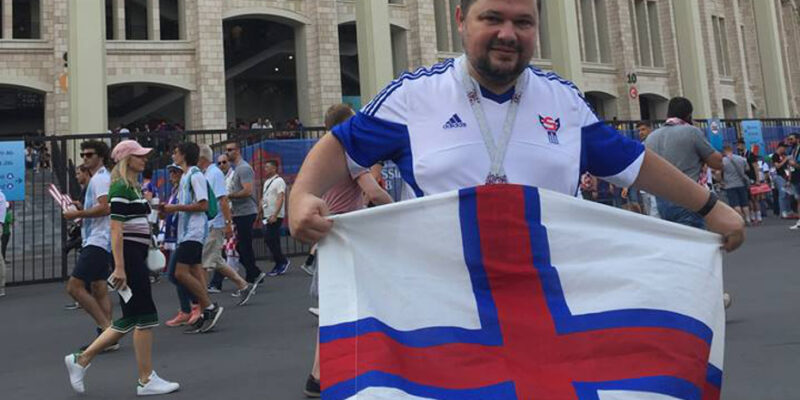 My name is Ivan Eginsson Eysturland. I am 44 years old and I was born Ivan Jevgénievitj Moskalenko in Moscow, Russia (Soviet Union). I spent a part of my formative years in Paris, France, where my father worked at that time. I was employed as a journalist in Moscow and postman in Tórshavn, since 2001 I have been in shipping and fishing industry, first years as a harbor agent and currently a shipbroker and advisor for a Danish company Atlantic Shipping. My major interests are travelling, geopolitics and international football, I am a very devoted fan of Faroes and Uruguay national teams. Since 2015, I have also been Uruguay´s honorary consul on the Faroes.

When and why did you move to the Faroe islands?

I have always been interested in small countries, island communities and Nordic culture and languages – and Faroes do represent it all. I became a keen supporter of the Faroese national team straight after their FIFA and UEFA recognition and September 12th, 1990, when Faroes beat Austria in the their very first official competitive match, was the day that changed my life forever. Since then, I had a dream of visiting to the Faroes, which I did for the first time as a Russian NTV reporter in September 1995. I started travelling to see matches of the Faroes, home and away and got a few Faroese friends, that helped me with learning Faroese and practical matters, as I got the idea of moving to the Faroes for good. When I finally came to live here, in January 1998, I was already able to communicate in Faroese and got totally fluent within a short period of time – I guess it was not because of my exceptional linguistic talents but rather my burning passion for the Faroese language and will to assimilate into Faroese society as much as possible. But it was also true that I felt really unhappy in Moscow, despite having an interesting job and no economic problems, as I thought my personal freedom was limited in a country like Russia, where I never came to thrive after moving back from France with my parents some years previously.

What was your first impression of the Faroe Islands and Faroese people?

I tended to idealize Faroese people, which possibly wasn´t so surprising after moving from a very rough and unpleasant Russian society (from my point of view at least), at first I felt Faroese were the nicest and kindest people in the world and they welcomed me with open arms.

What’s the best thing about the Faroe Islands and Faroese people?

I like that Faroese value every single person highly, which is not common in bigger countries. Faroese are quite simple and modest in a positive way, have a great focus on their families and general sense of community and togetherness. Security, of course, is the best with the Faroes as a country, it´s a great feeling to be able to leave the country for weeks without having to lock your home – to be honest, I don´t even remember, how the key to my front door looks like!

What’s the worst thing about the Faroe islands and Faroese people?

The most Faroese will not tell you that openly, but they will never fully treat a non-Faroese person as their equal in their own country. Having a grandmother from Vágur or a grandfather from Viðareiði makes you more interesting in the eyes of most Faroese, then getting to know your personality if you are of foreign origin. This is frustrating but I guess you can do nothing about that. What else? Gossips about just anything. Widespread pedophilia, you hear of every now and then. And the fact that around half of Faroese don´t believe it´s possible or just don´t bother about standing on their own feet as a nation and as a country, creating a sovereign state, being so much different from Danes and Greenlanders in this so called Realm of Danish Kingdom.

What are the differences between the Faroe Islands and your home country?

Everything is so different. It is probably easier to mention similarities, yet they are few! But I think than mentally and even in their looks, Faroese and Russians are in general more alike than, say, Faroese and Danish or especially Russians and Danish.

I used to listen a lot to Faroese music in my younger days, pretty much everything from Frændur to MC Restorff. Maybe I don´t have any favorite bands but I generally consider Faroese music to be at an exceptionally high level, bearing so tiny population in mind.

Do you like Faroese food? If yes, what are your favorite dishes?

I adore Faroese food, I find it both tasty, special and unorthodox. I especially like fermented dishes, such as boiled fish with sheep intestine fat sauce (“ræstur fiskur og garnatálg”) or baked sheep meat (“ræstkjøt”), as well as classic combination of dried whale meat, whale blubber, fish with boiled potatoes (“turr grind, spik og turrur fiskur við eplum”). Sadly, my wife doesn´t find my favourite Faroese food as attractive, mostly because of it´s smell, so my opportunities of trying it at our place are very limited!

Where do you see yourself in 10 years?

It depends very much on our private and professional situation, we don´t have family bonds on the Faroes and my source of income is also elsewhere. There are three opportunities: we are either in Uruguay, which we also like a lot or Poland, my wife´s native country – or possibly still here on the Faroes. So, I don´t really look that far into the future!

What are your strengths/weaknesses?

I am very determined to reach my goals, even though some of them seem unusual or even crazy to many other people, I am not a conformist or afraid of saying my opinion or “swimming against the stream”, I think I am also quite generous. I am not the worst negotiator in business matters and am able to communicate in seven-eight languages. On the other hand, I am not very social, at times I can easily lose control of myself in some controversial but even rather innocent life situations. I am also a very unpractical type, when it comes to housekeeping.

Becoming a father, preferably more than once. From non-personal matters, I would love to see Uruguay winning the world cup once again and the Faroes becoming an independent republic.

“Some people believe football is a matter of life and death but it´more important than that” – Bill Shankly (1913-1981) from Scotland saying that shortly before his passing – I am not a Liverpool fan though.

Which other countries have you been to?

I am an avid traveller and use every chance to see as much of this world as possible. I have travelled a lot in connection with my job but also privately. I have been to 93 out of 194 UN member states, 98 out of 210 FIFA member countries (including the likes of Faroes or Scotland), and if we count the likes of Greenland, Falkland islands, Svalbard or Reunion (neither sovereign states nor FIFA members), then my list is far longer than 100 countries. Actually I only know two residents of the Faroes, who have been to more countries than me: my long standing friend Atli Leo, with some 10-15 countries ahead and my wife Kinga, who fully shares my travel passion, with a couple of countries more than me!

I used to read a lot as a child and teenager but maybe not so much anymore. My favourite author is Anton Chehov (1860-1904) from Russia but I mostly like his short novels. The book that arguably made the biggest impression on me was “L’Île mystérieuse” (“The Mysterious Island”) from 1875 by Jules Verne (1828-1905) from France. I guess I got my lifelasting passion for islands after reading this book.

I am not very much into cinema and my favourite films are mostly unknown to Faroese mainstream taste, as they are either French or Russian. From more common (read American) movies my favorite ones are “Duel” (1971) and “Back to the future” (1985).

If you could change one thing in your life, what would it be?

Having children and at far earlier stages of my life.

What would you do if you won one million DKK?

I would fully pay my morgage and put the rest into my bank account. Maybe offer my wife and our parents a cruise trip somewhere in Pacific.

What advice would you give to foreigners who plan to move to the Faroe Islands?

Think twice before moving, if you don´t have a Faroese spouse/partner. It is not an easy society to get integrated to, as families, old friendships and bonds are holy to Faroese people and they don´t really seek new friends (especially foreigners) in their adolescence. You could possible still have a nice and exciting life on the Faroes without a local family but you must have extremely good social skills, strong knowledge of internal Faroese matters and complete fluency in Faroese for being a really active and widely accepted member of the society.