The planet of the farmers? Saksunite big farmer threatens to call police on tourists 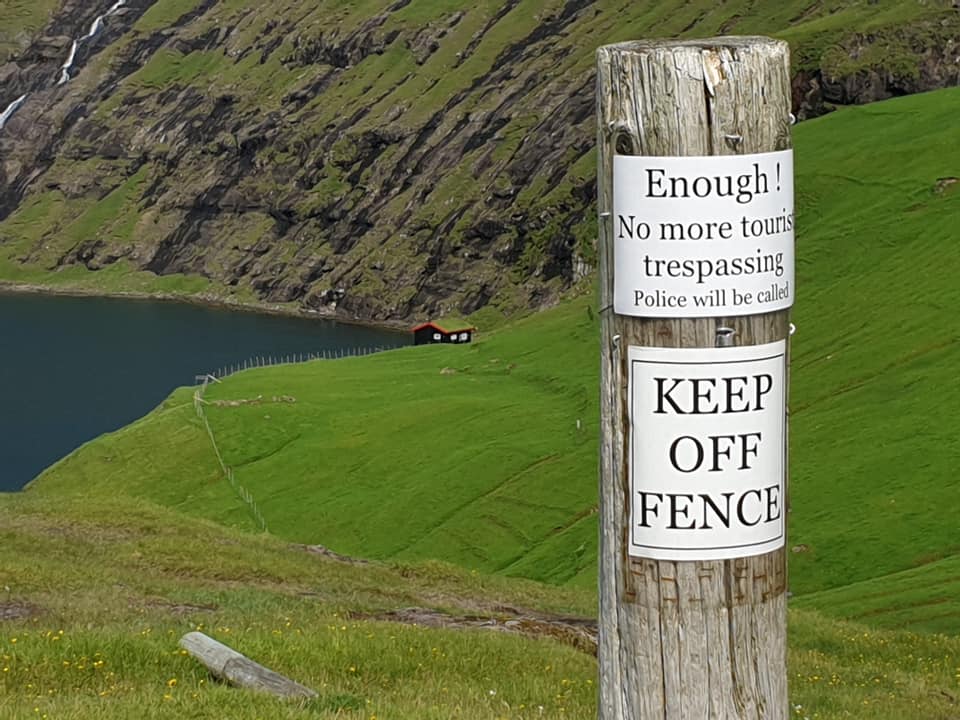 In the latest bizarre incident to dent Saskun’s reputation, Mr. Jógvansson now threatens to call the police if tourists continue to trespass his land.

Mr. Jógvansson is apparently fed up with tourist trespassing and wants tourists to leave the famous turf-roofed house in the village (see picture above) alone.

A message to tourists reads as follows: “There is a house in Saksun that belongs to a farmer that is the image that comes to mind when people envision Saksun. Yes, the one that stands all alone with the grass roof. I am not even going to put a photo of it here as it is contradicting to what I am about to say. The guy who resides there doesn‘t like when you trample across his land. He doesn‘t like it when you peer in his windows. He also probably doesn‘t like your Instagram photo shoot that you‘re about to do beside or in front of it. Leave it alone. There are plenty of spots to photograph in Saksun, so long as you do it respectfully.”

These are indeed difficult times for tourists – and Faroe Islanders alike – who are coming to Saksun. Earlier this week, another Saksunite farmer, Mr. André Kruse set up a wicket gate at the road that leads to popular tourist attraction Sakun Beach. In addition, he also attached a payment terminal to the gate.

“There are so many people now, and we are forced to do something, and we have decided that the money that comes in will be used for paths and other maintenance,” said Mr. Kruse.

It is expected that the Saksun Beach admission fee will be about 50-75 DKK.

Read more: Free no more, dear tourist! It will now cost 67 USD to hike from Miðvágur to Trælanípan

Read more: Path number 5 to the lighthouse is closed

As for the aforementioned Mr. Jógvansson, in April last year two female tourists from Denmark were allegedly threatened by him on a visit to Saksun.

In an interview with Kringvarp Føroya (Kvf.fo), the young women explained that the ill-tempered farmer yelled and swore at them when they drove past him after they had filmed him with his dog and a flock of sheep.

”He speeds up and there is less than a meter between his car and our car. So we have to reverse and pull to the right as we were afraid of being struck. It almost felt like he tried to force us off the road,” explained the shell-shocked women.

According to Kringvarp Føroya, Mr. Jógvansson claimed he did not remember this particular incident. However, he did not deny that the incident took place, either.

Mr. Jógvansson has also, rather curiously, admitted that he was the one who wrote ”this is not Disneyland. Tourists, go home” on a wagon that stood in the village of Saksun in April last year. Jógvansson denied that the message on the wagon was directed at tourists; instead he claimed that the message was directed to the new development department of Visit Faroe Islands.

Read more: Notorious farmer admits he was the one who wrote “xenophobic message”…

Read more: ”This is not Disneyland. Tourists, go home”, say xenophobic thugs in a message to joyous travelers

What is more, in May last year another two people were allegedly threatened while visiting the village of Saksun.

At first, the two people were frightened. They told VP: ”The first thing that came to our minds was to refer the incident to the police. But when we had both calmed down and discussed the matter with the ”sýslumaðurin” (the local sheriff), we decided not to notify the police.” Previous article
“I am vegan. I am in love with the Faroe Islands. I am sad about the killing of every kind of animal”
Next article
Pictures: Ovastevna 2019