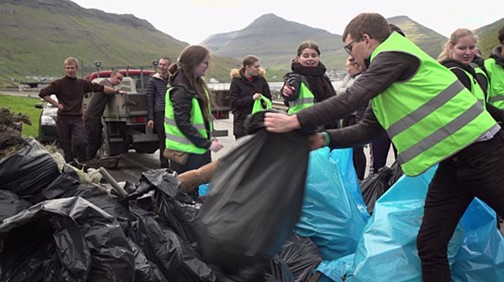 More than 1,000 Faroese volunteers helped clean up 26 tonnes of rubbish across the Faroe Islands on World Cleanup Day, 21 September. They joined 20 million people from 180 countries in cleaning up litter as part of the annual global social action programme aimed at combating the global solid waste problem.

“We are so pleased with this year’s cleanup day,” says Bjørk Berg Wiggins, one of the organisers.

This year’s cleanup operation yielded four tonnes of rubbish more than last year. The main reason for this increase is that many old industrial areas were cleared this year.

“Now that a lot of old rubbish that has been lying around for many years has been cleared away, it should be much easier to clean up in the coming years,” says Bjørk Berg Wiggins, one of the organisers.

Rudda Føroyar was held in 11 locations in the country, with local municipalities playing a large role in organising cleanup operations.

The inaugural World Cleanup Day was 15 September 2018, but it builds on the successes of previous global cleanup efforts. There are numerous organisations that facilitate the host World Cleaup Day event globally. Like Earth Day, World Cleanup Day is a non-partisan, apolitical, and is not affiliated with any national or global political party or discrete ideology. Participants in World Cleanup Days are typically volunteers, with coordination from non-governmental organizations who assist in awareness-raising, logistics, and fundraising.

Next year’s World Cleanup Day will be held on 19 September.