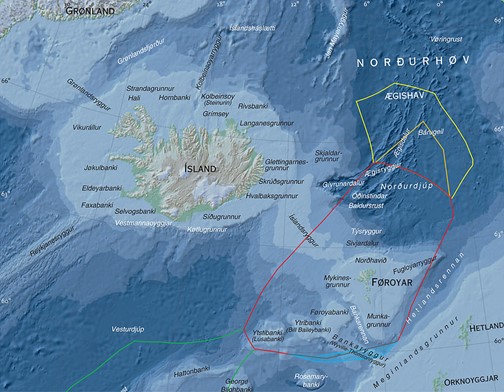 The signing ceremony took place in Stockholm during this year’s Session of the Nordic Council. Jenis av Rana signed the agreements on behalf of the Faroe Islands, and Jeppe Kofod signed on behalf of the Kingdom of Denmark.

Background
The Faroe Islands, Iceland and Norway have set forward claims to parts of the continental shelf in the Ægir Basin, which is located north of the Faroe Islands.

Already in 2006 the parties entered into a political understanding regarding a putative delimitation of the area within which there were overlapping claimed entitlements. The Faroe Islands were attributed approximately a quarter of the area with overlapping entitlements. Iceland was attributed a territory of approximately the same size, while Norway was attributed half of the area as Norway has rights to the area which stem from the Norwegian mainland and the island of Jan Mayen. The political understanding from 2006 laid down prospective delimitation lines that were made contingent upon the relevant claims in question being approved by the Commission on the Limits of the Continental Shelf of the United Nation (CLCS).

In 2016 the CLCS had completed the consideration of all of the claims of all three parties, confirming  the basis underlying the political understanding of 2006. Subsequently, the countries have resumed negotiations with a view to agreeing on a legal framework governing the exploitation of potential transboundary mineral deposits

With the conclusion of the delimitation agreements with Iceland and Norway, the jurisdiction of the Faroe Islands with respect to the exploration of the continental shelf and the exploitation of its resources has increased by 27,000 square kilometres.

“I am delighted that after all these years, we can take these last and historical steps,” says Jenis of Rana, Faroese Minister of Foreign Affairs.

“The outcome is the result of a solid and strong cooperation across different national governmental bodies, including the involvement of a broad range of expertise.”