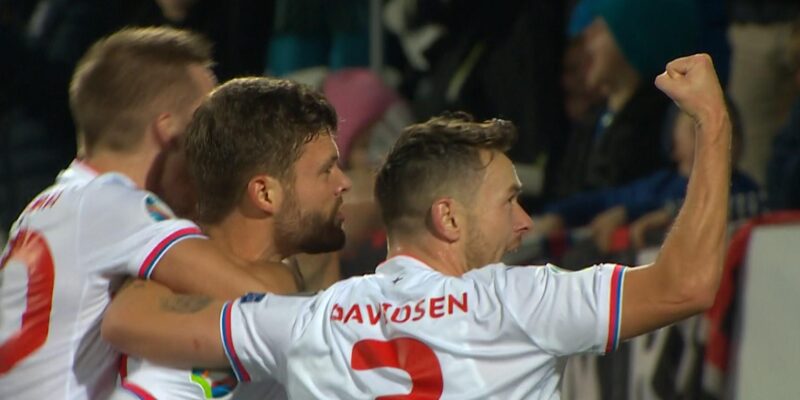 UEFA Euro 2020 qualifying: After a strenuous and wearisome 13 matches, 13 months, 403 days or 9672 hours, the Faroe Islands have finally returned to winning ways!!

Ironically against the same team, they last tasted victory against: Malta.

The performance was not as fluent or exciting as the last time, (which ended 3-1), but with such a long streak without victory, confidence within the team was rock-bottom, and even a scrappy 1-0 against a nation ranked 70 places lower was met with open arms by the Faroese spectators.

You see, this was not just the shattering of 13 winless matches. It also broke the run of 7 consecutive defeats, the first goal scored in 5 (in the 4-1 loss to Spain), and the first clean sheet in 14 (the friendly match against Liechtenstein).

To end such negative records all in one match was a huge relief, and that relief was etched on every player and supporter face at full time.

After the game, this correspondent spoke with match-winner Rógvi Baldvinsson who remarked: “it’s a difficult game, as they are all behind the ball, so we had to be patient, and it feels good to win again and unbelievable to score the deciding goal.”

The fact that it was also the final home games for manager Lars Olsen and captain Atli Gregersen gave further spectacle to the occasion, and a clean sheet win was a fitting goodbye for two defenders, and now two Faroese legends.

When reflecting with a satisfied Lars Olsen, he declared: “it is a lovely feeling to end the last home match with a victory, the players deserve it”.

When asked about leaving the national side, Olsen stated: ” I will always follow the Faroe Islands results and see how the players are doing. I have made a lot of good memories here.”

When questioned about his highlight in charge, Olsen answered: “Greece at home in front of 5000 Faroese fans was fantastic and hard to top!!.”

An emotional Atli Gregersen said: “the scenes after the game was amazing, it felt like an out of body experience, and I am so happy for my teammates, it’s an amazing day to be a Faroese football player”.

When reflecting on his prodigious career, Gregersen stated: “I remember when I made my international debut against Serbia at 27, and I was against 6 foot 8 Nikola Zigic, and he absolutely smashed me, and I thought ‘welcome to international football‘. Its been great to represent my country with so many amazing memories and put the Faroe Islands on the map”.

When asked about the departing manager, Gregersen passionately answered with: “he is a great man, a great leader, the boys love him and we always fight for him”.

An emotional evening capped off in celebration and joy, a truly appropriate Tórsvøllur send off for two men that have given the nation so much joy over recent years.