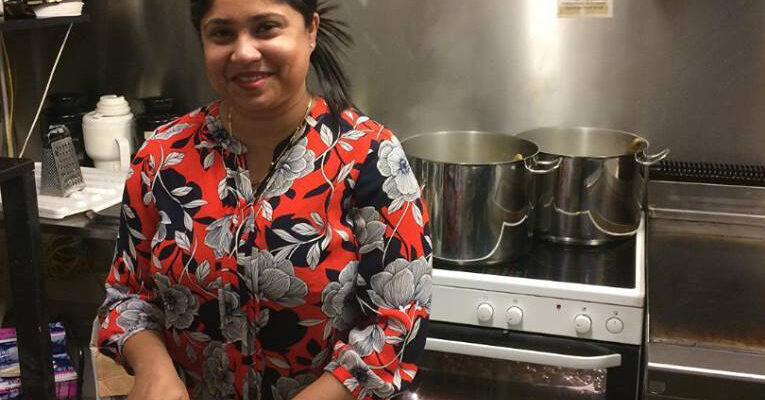 Sirkus Föroyar – trendy bar, restaurant and venue in the heart of Tórshavn – is most definitely the go-to place if you are heading out for first class Indian food in the Faroe Islands.

The two innovators who have made this Indian option in downtown Tórshavn possible are Sunneva Háberg Eysturstein (33), owner and manager of Sirkus Föroyar, and Srikanya Nandi, aka Keka (38) – the brilliant chef who first moved to the Faroe Islands back in 2001.

Originally, Sirkus Föroyar was not a restaurant, but as the years rolled by Sunneva realised that the demand for tasty bar food – especially varieties of vegetarian and vegan food – was enormous. Later on, after she had coincidentally met Srikanya Nandi at the Faroese immigration office in Tórshavn, she put Indian food on the menu and hired Srikanya.

This was two years ago.

Srikanya´s story is quite an interesting one. She and her husband, Aritra Nandy, originally moved from Kolkata to the Faroe Islands in 2001 after Aritra had been appointed as new head coach of the Faroe Islands national badminton team. Aritra coahced the national team from 2001 to 2004 when he and his wife moved back to India.

But in 2008, Aritra returned to the Faroe islands for a second spell in charge of the national badminton team – with Srikanya following suit.

– It was very easy for me to come to the Faroe Islands in the first place, back in 2001. People were very friendly to me and my husband and people looked up to us and respected us. I feel lucky beacuse of that.

– We never got this feeling of being lonely or isolated as we were very engaged in Faroese society with badminton and all. My husband was the coach of the national team while I was the coach of a youth team, Srikanya tells Local.fo when we asked her about the early days in the Faroe Islands.

Srikanya does not speak Faroese and finds the pronunciation difficult but she has, nevertheless, come to understand more and more of the Faroese language over the years.

– I consider myself an Indian-Faroese now. When I went back to India, I dreamt about the Faroe Islands every night, Srikanya says.

However, it is unlikely that Srikanya dreamt sweet dreams about the smell of fermented meat – at least not before she eventually became accustomed to it, that is.

– In the beginning, I was wondering what that smell was. My neighbor was cooking and I thought to myself ”well, maybe something is wrong with his pipe”. It was a really different experience, Srikanya recalls when asked about what it was like to expericence fermented meat for the first time in the Faroe Islands.

Srkianya considers herself and her family – i.e. husband and two children – as very ”foody”.

– I keep two spice boxes in the kitchen here in Sirkus and I buy fresh ingredients and do a lot of research on food. I love cooking Indian food. I am very proud of the Indian culture – and so are most Indians.

– So this is my passion and this is why Sunneva and I are such a good fit. She loves running the bar and all while I love experimenting with cooking. Originally, I was thinking – or maybe dreaming – of starting my own Indian restaurant here in the Faroe Islands but then Sunneva came along and made me an offer and that was that, Srikanya says.

And that was that – for now.

✕
We use cookies to ensure that we give you the best experience on our website. If you continue to use this site we will assume that you are happy with it. We will never sell or otherwise provide your data to third parties. Read more about our privacy policy here.OK