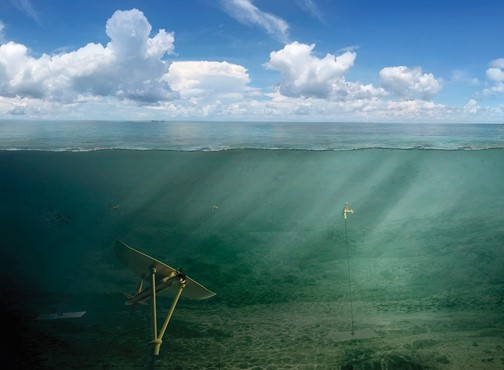 Swedish marine energy developer Minesto and Faroese energy company SEV have been awarded a €2.5 million grant from the European Commission’s SME Instrument programme. The grant will support the installation of Minesto’s unique Deep Green technology in the Faroe Islands.

“This is great news for Minesto and our joint project with the utility customer SEV,” says Dr Martin Edlund, CEO of Minesto. “The EU community has once again show trust and commitment in our technology and commercialisation roadmap.”

When matched with Minesto’s technology, the tidal current resource in the Faroe Islands will constitute a valuable share of the grid mix in a cost-effective and 100 percent renewable energy system by 2030. Following the first planned installations in Vestmannasund in the Faroe Islands, the long-term ambition of the Minesto-SEV collaboration is a stepwise build-out up to 70MW installed capacity.

“The project with Mineto’s unique and ground-breaking technology is very exciting,” says Tórfinn S. Simonsen, project leader at SEV. “It can play an important role in accounting for much of our green energy in 2030, when 100% of power on land will be produced by renewable energy.”

Minesto’s proposal for funding support from the SME Instrument phase 2 was selected for the maximum amount of funding in competition with 1,764 other applications from small and medium-sized enterprises in 35 countries.

SME Instrument is part of the European Commission’s European Innovation Council (EIC) and supports ground-breaking innovative ideas for products, services or processes that are ready to conquer global markets. It is divided in different phases with €50,000 grants available in phase 1, which Minesto was awarded in June 2018. In phase 2, grants in the range of €500,000–€2.5m are available for innovation development and demonstration purposes.

Previous articlePictures: 900-year-old tradition is kept alive as the annual opening of the Løgting takes place on St. Olaf’s Day
Next articlePamela Anderson, who was in the Faroes in 2014 to stop the grind, now demands protection of wild salmon by removal of salmon farms from British Columbia