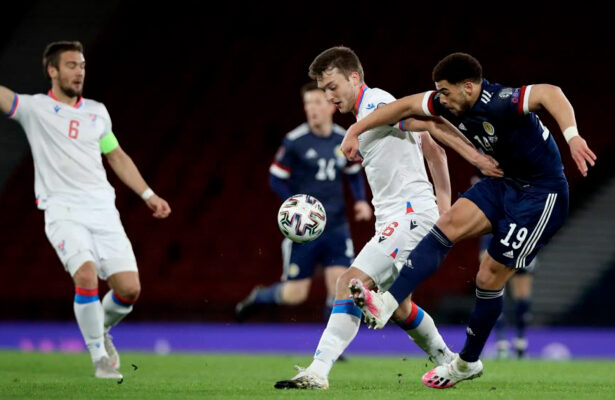 A tired Faroese side was comprehensive beaten 4-0 by a clinical Scotland. John Mcginn opened the scoring after just 7 minutes, but the rest of the half saw a relatively even affair, with Brandur Hendriksson’s long-range effort forcing a fantastic full-stretch save from goalkeeper Craig Gordon; but sadly, this was as good as it got for the Faroe Islands. As Scotland added three more goals from Mcginn again, a Che Adams long-range strike and a Ryan Fraser header.

4-0 was a rather harsh scoreline, with Scotland only having 6 shots on target alone and Jóan Símun Edmundsson being guilty of wasting 3 glorious chances for the Faroe Islands, which would have added some respectability to the scoreline. Although it can also be said that Scotland never had to get out of second gear.

Many influential factors have to be taken into account when reviewing the Faroese performance, however. Such as 3 games in just 6 days, hard for any side, let alone one with such a small pool of players as the Faroes, who simply don’t have the luxury of being able to rotate freely. 3 straight away games also do not help, with long journeys to Moldova, Austria and Scotland. As a result, even before the game started, the Faroe Islands had their work cut out. Nonetheless, the players and staff will still be disappointed with a somewhat lethargic and tame display against the local rivals. Here are my player’s ratings:

1) Gunnar Nielsen: 6/10 — Little chance with any of the goals, and not many other testing shots of note to save.

9) Gilli Rólantsson: 5/10 — Arduous task against two of the best left-sided players in the world (Robertson and Tierney), understandably struggled against them. 3 of the 4 goals were down that side; tough night for the Odds BK man.

16) Gunnar Vatnhamar: 5.5/10 — Converted back to centre-back for today’s game and battled well aerially against Dykes, but struggled when the ball was on the ground. Turned far too easily for Adam’s goal.

5) Sonni Nattestad: 6/10 — The best Faroese centre-back technically, and didn’t play bad or make any glaring mistakes. But not helped by not having a solid partner beside him (a different one for each of the 3 games).

3) Viljormur Davidsen: 6/10 — Solid again down the left side, couple of vital interceptions, but a slight blip that he let Mcginn run free for the second goal.

10) Solvi Vatnhamar: 4/10 — Difficult time against Tierney and Robertson, and very wasteful in some promising attacking positions.

6) Hallur Hansson (C): 6.5/10 — The dynamic captain left everything on the pitch like he always does; quality-wise, he has had better matches.

22) Jákup Andreasen: 6/10 — Night to remember for the midfielder, as it was his first senior international start, and he worked really hard in the middle of the park. But it was a baptism of fire against the skilled Mcginn, and he struggled technically.

8) Brandur Hendriksson: 7.5/10 — Another superb display by the influential midfielder, by far the brightest spark for the Faroe Islands, always confident and wanted the ball,. 2 great long-range efforts, the first superbly saved by Craig Gordon.

14) Jóan Símun Edmundsson: 4/10 — Fluffed 3 glorious chances, and the tactic of playing long balls to him is simply not his game. Should be played in his more accustomed right-wing role.

18) Meinhard Olsen: 5/10 — Quite evening up top for the Bryne man, with little service to work off.

17) Patrik Johannesen: 6/10 (on 69 min for S.Vatnhamar) — Another impressive cameo by the strike, forced Gordon into a smart save with a powerful header.

Manager Håkan Ericson: 5.5/10 — The Faroese head coach biggest competitive defeat to date and a night to forget for the Swede. Players looked tired, mainly in part to little rotation over the three matches, highlighting the difficulty of the Faroe Islands small pool of players available, allowing for squad depth. The defence also looks like the most significant weakness, as Ericson is yet to settle on a back 4 (3 games, 3 different defences).

Now the first round of qualifiers are over, international football will take a break until the first week of June, when the national team will face 2 home friendly matches against Iceland and Liechtenstein.