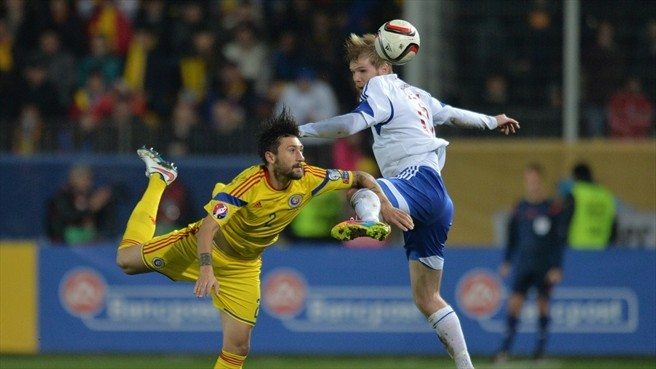 On Tuesday the Faroe Islands experienced a second defeat in the space of three days, with a crushing away 4-1 loss against Romania.

With crucial players Jóan Símun Edmundsson and Sonni Ragnar Nattestad missing, it was always going to be a up hill battle against a team who has not lost a competitive match at home in over three years, and who are also currently ranked 25th in the world. Having said this, optimism was still high, considering the last time we played in Romania (4 years ago) Faroe Islands narrowly lost 1-0, and this time around it could be argued had an even better team.

The most disappointing part of defeat was the manner in which the Faroese conceded, with the first three goals being more of a question of bad defending rather than quality shown by Romania. They were all truly gifts, and also highlighted poor set-up and communication in defending set-pieces.

However, there were also a lot more positives to take from this game than the last one. Rene Shaki Joensen and Brandur Hendriksson vastly improved and showed us all what we know they can do, Hallur Hansson again produced a impressive display against a good Romanian outfit and Viljormur Davidsen bagged his first international game, which was greatly deserved for the ever reliable left back. And the overall build up play and passing was better than against Malta in the previous game, which begs the question why did we not see such play against a inferior side?

Despite the positives, this defeat can still be considered a step backwards for the Faroese national side, with pressure mounting on boss Lars Olsen, and the poor manner in which goals were conceded at will won’t dampen the mounting criticism. The fact that he also choose to drop a goalscorer in Jákup Thomsen for Klæmint Olsen (who has never proven himself at international level) can also be considered a poor decision by the manager.

Olsen has massively improved the Faroese side since his appointment, and has been a great footballing influence on the country. He now has two huge games in June to restore some parity, positivity and confidence to this national team, quite possibly the two biggest matches of his Faroese tenure.

Overall, if the last two matches have taught us anything, it is how crucial the two missing players are to the Faroe Islands set-up. Jóan Símun Edmundsson is vital in creating that attacking spark and moment out of nothing, and Sonni Ragnar Nattestad is pivotal to give the side much needed defensive stability and pace, which was horrendously exposed with the Odmar Færø and Atli Gregersen partnership. The fact that Sonni played in the corresponding fixture four years ago, and we conceded just one goal is proof of that. Take these two players out of the side, and the attacking threat, and defensive solidity are thrown out of the window.