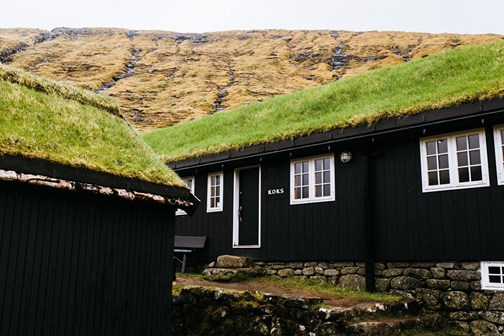 In 2017, KOKS was awarded its first – and the Faroe Islands’ first – Michelin star. In February, the gourmet restaurant known for its unique versions of traditional Faroese flavours was given a second Michelin star, establishing its position in the world’s culinary elite. Less than 500 restaurants worldwide have two Michelin stars.

According to the Guide, one star signifies “a very good restaurant”, two stars are “excellent cooking that is worth a detour”, and three stars mean “exceptional cuisine that is worth a special journey.” The announcement that KOKS had won a second Michelin star immediately resulted in hundreds of bookings.

“Being awarded one Michelin star was unbelievable, but getting a second star has left us utterly speechless,” says 28-year-old chef Poul Andrias Ziska, who was also awarded Nordic Young Chef of the Year 2019 at the awards ceremony in Århus, Denmark.

Last year, KOKS restaurant moved to an eighteen-century, grass-roofed farmhouse isolated in the valley of Leynavatn, about a 20-minute drive from Tórshavn, the capital.

“KOKS’ location and physical surroundings play a big role in the overall experience that our guests have, and I can only imagine that it has also played a part being awarded a second Michelin star,” says Poul Andrias.

Niels Steenstrup Zeeberg, CEO of White Guide, a guide to Nordic restaurants, believes KOKS has the potential to be the best restaurant in the world.

“Poul Andrias is young and curious,” says Niels. “If he continues to develop as a chef, I believe that KOKS can become the best restaurant in the world in a few years.”

The 18-course menu is a celebration of the myriad sights, flavours and aromas found in the Faroe Islands. The kitchen pays tribute to the islands’ culinary traditions, while embracing a philosophy of cooking that relies on locally sourced ingredients. Dishes include a national favourite, skerpikjøt (wind-dried mutton), langoustine, rhubarb compote, sea tangle, wild thyme ice cream and mahogany clam, which has a unique lifespan of hundreds of years.

“The Faroe Islands are 99% ocean, so the majority of our menu comes from the sea, and almost all the rest is made from local ingredients,” says Poul Andrias.