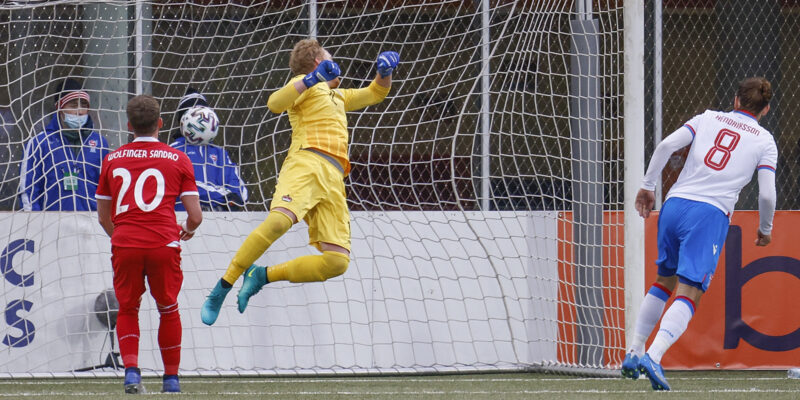 On Monday, the Faroe Islands put behind the disappointment of last Friday’s defeat to Iceland and comprehensively beat Liechtenstein 5-1. It was a feat never achieved by the national side before, scoring 5 goals in an officially recognised fixture. On top of this, the 4 goal margin made it the biggest victory ever for the Faroes, in a really memorable night for the nation.

However, things did not start off too swimmingly, as, after just 11 minutes, keeper Tórður Thomsen had to hobble off with a knee injury, extremely unlucky for a man making his first international cap in over 7 years. This was compelled by Liechtenstein taking a surprise lead in the 19th minute after Maximilian Göppel slotted calmly past substitute goalkeeper Teitur Gestsson when put through 1-on-1. Luckily, that was the end of the misery for the Faroese players. And restored parity just 4 minutes later, after Klæmint Olsen innovative volley from an inviting Viljormur Davidsen cross. Things then got even better on the 38th minute, as the Faroes took the lead after a powerful Brandur Hendriksson header from an exquisite Sølvi Vatnhamar cross. Hendriksson furthered the lead just 3 minutes later, with an emphatic right-footed finish into the bottom corner, after a cleverly placed through ball by Meinhard Olsen.

Halfway through the second half, Klæmint Olsen grabbed his second goal with a downward header from close-range, after a dangerous Petur Knudsen corner. Scoring was wrapped up with 11 minutes to go, as Davidsen cooly converted a penalty after Klæmint Olsen was chopped from behind in the box.

Scoring five was a first for the Faroe Islands as an official FIFA member. And truth be told, the Faroese team could have scored 8 or 9, with utter dominance throughout most of the contest. This is supported with the incredible stat that the Faroes had 70% possession and 27 shots at goal, quite a remarkable feat for any nation, let alone one with a population of 52,000!

It was also the Faroes largest-ever margin of victory, with a 3-goal gap (3-0 win over San Marino in 1995, and 4-1 against Gibraltar in 2014) being the previous biggest. A huge congratulations to the players and staff for achieving two records in one match and showing great character and fortitude after going behind early on. Here are my match ratings:

The match also marked the 50th cap for Sølvi Vatnhamar, and in doing so, he becomes the 20th player in the countries history to achieve the distinguished achievement. Vatnhamar, who has been an ever-present in the side since his debut in 2013 and will go down in Faroese folklore for being the man who assisted both goals in the famous 2-1 home victory against Greece, amongst various highlights in a glittering career for both nation and club side Víkingur Gøta, not bad for a construction worker from Leirvík!

When asked about reaching 50 caps, Sølvi remarked: “It’s definitely something I can be proud of. A lot has been sacrificed from my wife and children that make this possible for me. So I have a lot to be thankful for! Playing for the Faroese national team is the greatest thing you can achieve as a Faroese player, and I am happy and proud to achieve this. It has been a wonderful time, with some amazing experiences, and hopefully, more are on the way!”

With the victory, the crucial first of 2021 is welcomed, and Håkan Ericson and the team will take many positives from the two friendly matches. Especially in the style of play, which in both games has been of high, free-flowing quality and shows plenty to look forward to going forward.

Next up for the Faroe Islands is Israel at home on the 1st of September, and hopefully, the loyal home crowd will be allowed into Tórsvøllur to roar the players on!