“Puffin beaks are fluorescent and we had no idea”, says English scientist 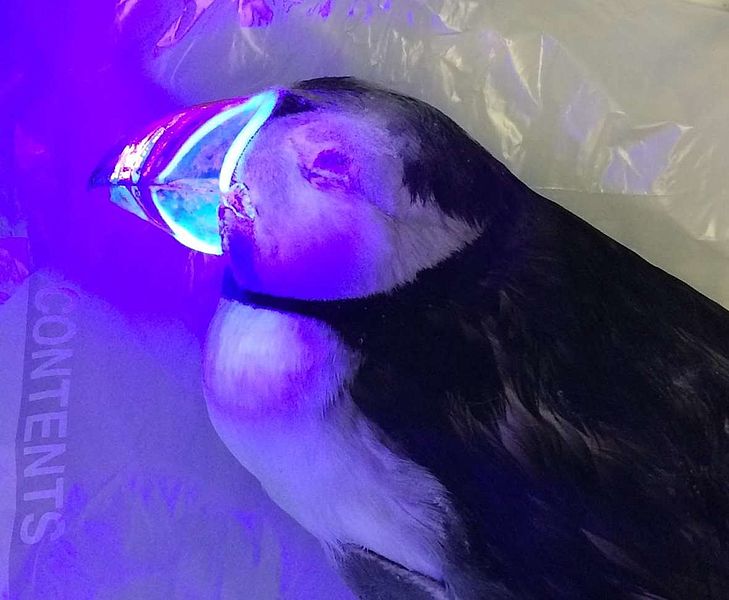 A scientist in England has made an enlightening discovery about Atlantic puffins — under a UV light, their bills glow like a freshly cracked glow stick.

“It was sort of discovered by accident,” said Jamie Dunning, the ornithologist who first saw the beaks light up, according to CBC.

Dunning normally works with twites, another type of bird, but he had been wondering if puffins had Day-Glo beaks for a while, since crested auklets — seabirds in the same family — also have light-up bills, writes CBC.

So one January day, while having a “troubling” time in the lab, he threw off the lights and shone a UV light on a puffin carcass.

“What happened was quite impressive, really,” he said.

The two yellow ridges on the puffin’s bill — called the lamella and the cere — lit up like a firefly.

And it’s real fluorescence, Dunning emphasizes: something about those parts of the puffin bill is allowing that UV light to be absorbed and re-emitted as a bright glowing light.

It’s just not clear yet what that something is, he said.

Unlike humans, birds have always known about the extra colours in the puffin bill. That’s because they can see a whole other dimension of hues, said Dunning.

Humans see colours that are a mix of red, blue and green light, he notes, while birds have a fourth colour in the mix — a property called tetrachromatic vision.

“They can see colours that we can’t comprehend,” Dunning said, according to CBC.