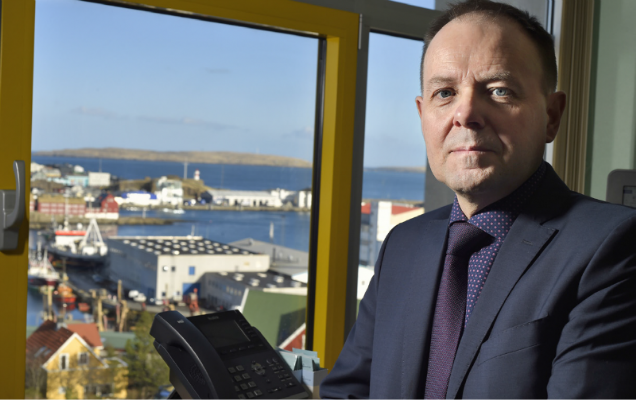 Navigation and engineering school Vinnuháskúlin is ready to move ahead with an important expansion to consolidate its training programs under one roof—completing its comprehensive upgrade process that was initiated in 2014.

With some 250 trainees attending the school on an annual basis, Vinnuháskúlin (VH) plays a vital role in educating and training the Faroe Islands’ navigators and marine engineers. And with maritime business at the heart of the country’s economy, fostering the best conditions and a modern educational framework to meet today’s standards and requirements is a constant priority for VH, according to managing director Wilhelm E. Petersen.

Under the leadership of Mr. Petersen since December 2013, the school has undergone an overhaul with major upgrades in equipment and technology combined with modernization of training programs and courses.

The final phase in this upgrade process will be the extension of the VH building to make room for gathering all classes under one roof, a plan that is now underway.

“Our focus remains to stay on par with the best international establishments in this field,” Mr. Petersen noted. “We’re confident that we’re able to fulfill this; however, at the same time we’re all — students, maritime industries, public authorities, trade unions, to name some — fully aware of the importance for the Faroe Islands to be able to provide the best training for navigators and engineers. As we have undergone this process of modernizing the school and boosted and updated our equipment and implemented the latest technology, we have likewise, importantly, improved and adjusted our training programs and courses.”

Back in 2005 the Faroese maritime education system made a significant leap forward with the merging into one of three schools: Sjómansskúlin (navigation), Maskinmeistaraskúlin (engineering) and Brandskúlin (fire prevention and firefighting). The idea was to consolidate the three schools under one name and one roof, which is essentially how the VH was created. However, at the time the completion of all aspects the merger turned out somewhat more challenging than expected.

Now at last time has come to take that step. It basically consists of adding a new 1,200 square-meter structure to the building that houses the VH’s main location at Nóatún, Tórshavn, to make room for the engineering classes, thereby keeping the entire VH under one roof.

Detailed price calculations and budgeting for the project were not available at the time of this writing (May 2018), however the cost is roughly estimated at around 21,000 dkk per m2, which will land the total price at just about 30 million dkk.

As the VH is government-owned, financing is generally funded by appropriation under the Faroese national budget. According to Mr. Petersen, the Ministry of Education, Research and Culture has expressed its support for the project, which has likewise been endorsed by teachers, staff, unions and numerous individuals.

In contrast, with regard to the upgrade of technology and equipment, VH has received a fair amount in grants from business corporations and financial institutions to cover the investments.

“We are very much looking forward to seeing the extension project get underway as it’s quite an exciting plan that will bring a boost to the maritime training programs and courses,” Mr. Petersen said. “Hopefully construction will commence in 2019.”

“Concentrating our activities in one location will greatly improve working conditions for teachers and other staff, and will generally raise the quality of the training,” he added.

“It has to do with putting our resources more effectively to use, saving time and effort for everyone, not least trainees and teachers. So it will bring more time efficiency and effectiveness in general, and allow for more synergies as all of VH will share one common environment. Only time will tell how much difference this will make; but it will potentially make a very big difference.”

VH’s main training programs are Skipper, Master of Navigation, Engineer 2999 KW, and Engineer Unlimited. In addition the school offers an array of additional courses for maritime professionals in subjects such as safety, search and rescue, utilization of new technologies and more, all of which are compliant with internationally recognized standards and specifications.

“As I’ve pointed out earlier, when it comes to equipment and technology, VH is second to none in the entire Nordic Seas area. Now that we’ve brought our main programs in line with the recommendations of the Danish Maritime Authority, we are in a better position than ever to help maintain and perhaps even further improve the excellent reputation that the Faroe Islands enjoys as a cradle of world-class sea officers.”