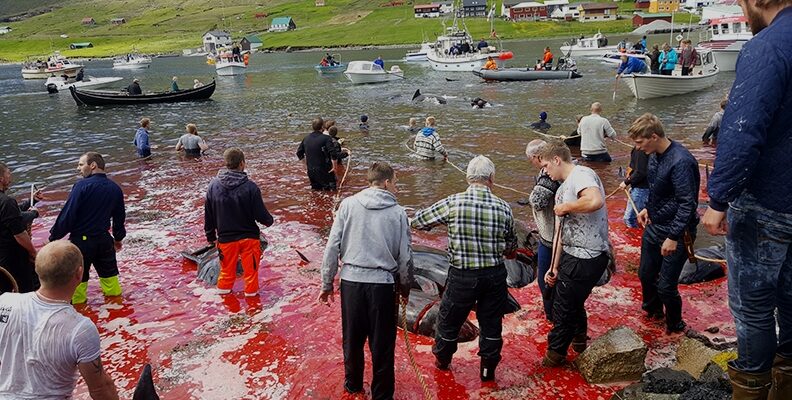 Neither the mackerel, the herring nor the whales are yours, and the EU has already boycotted the Faroe Islands in 2013 to prevent its unbearable eradication of fish stocks. The Faroese can eat almost anything they want, they can practice their personal religion and choose their own political party because it affects their private lives and applies to every free person. But you, dear Faroese, in contrast to your Viking ancestors are not allowed to use human skulls and hopefully soon no longer hunt and eat whales because these creatures are especially worthy of protection.

The fact that your government still allows you to eat whale meat does not mean that it is your right to do so. Yes, you can actually poison yourself and your children with the heavily metal-contaminated whale meat because your government has not yet banned you from doing so.

Every autonomous state usually has the government that it has chosen. A government and people following a barbaric tradition may be criticised by the world community. The authorisation for our demonstration in 2014 was explicitly confirmed to us (Whale and Dolphin Conservation Forum (WDSF) and ProWal) at the invitation of the Tórshavn police. “You are fully entitled to demonstrate and you are welcome to do so”, states a letter from the police in Tórshavn to the Whale and Dolphin Conservation Forum dated 4 July 2014.

Yes, it is even our democratic and legal right to boycott companies who import products from the Faroe Islands and to call for a boycott of these products. Yes, we are allowed to ask companies such as AIDA Cruises to stop visiting the Faroe Islands with thousands of guests. In 2013, AIDA responded to our request, writing a letter to the then Prime Minister of the Faroe Islands, Kaj Leo Johannesen, calling for a halt to whaling. Sadly the letter was to no avail. Since 2013, more than a thousand guests were allowed to refrain from visiting Klaksvik (Faroe Islands), because of its barbaric ways that even place children where they would have to watch the slaughter of whales, if it takes place at the time of their visit. Several thousand AIDA tourists have not spent their money on the Faroe Islands. Meanwhile, following WDSF interventions and animal rights protests, AIDA, Costa Crociere, HapagLloyd, TUI Cruises and TransOcean are ceasing landing in the Faroe Islands for animal welfare reasons and for the protection of their guests and crews. The declining number of guests from these major cruise companies has now increased to an annual five- digit figure.

The German fish company Gottfried Friedrichs in Hamburg has responded to our request to stop importing salmon from the Faroe Islands.

No German company offers visits to German slaughterhouses. Faroese even invite tourists to participate in the whale hunt. Shops in the Faroe Islands have layed out lists for tourists who can take part in whaling (for example, in Klaksvik in the bookstore “Leikalund”).

Hundreds of years ago the Faroese and Inuit in other countries may have had the right to hunt and eat whales in order to survive. Today there are more sheep than inhabitants in the Faroe Islands. The grocery stores in the Faroe Islands (for example SMS in Tórshaven) offer a wide range of food. No whales or dolphins need to be killed anymore to satisfy the hunger of the Faroese. Today it is common knowledge that the intelligence of these marine mammals is remarkable and we know that they can not be domesticated sustainably. However we also know about the greed of people who, like in the Faroe Islands, think they can get something for free, even if it is highly poisoned and just for keeping with an old tradition.

Of more than 190 recognised countries in the world, only the Faroe Islands, Japan, Norway, Iceland and Greenland hunt whales and dolphins for alleged food or research respectively. The import of whale and dolphin meat is prohibited throughout the European Union (EU). The roughly 50,000 inhabitants of the Faroe Islands face-off against several billion people worldwide who rebuke the hunting and consumption of whale meat. No recognised country still has impunity slavery. Child labor is prohibited in the EU. In the Faroe Islands, it has been confirmed that underage children are participating in the slaughter of pilot whales (a dolphin species).

Yes, we Europeans can file criminal charges against those responsible in the Faroe Islands if international or national laws are violated. In 2013, a WDSF criminal complaint stopped the hunt for a dolphin school of about 50 animals due to a police order because the case had not yet been closed and the police chief responsible, Finnbogi Midjord, had declared himself biased.

The competences of the Løgtings (Parliament of the Faroe Islands) are divided into an A sector and a B sector. The A sector includes all areas of responsibility that can be taken over by Løgting if either the Løgting or the Danish Folketing decide it. The B-Sector covers all issues that are delegated to the Løgting by the Faroese and Danish governments.

In general the Løgting is not responsible for national defense, justice and foreign policy. These are a matter of the Kingdom of Denmark. In 2005, however, with the Fámjin Treaty a bilateral agreement was signed, which decisively broadened Løgting’s competencies.

Our lawsuits against illegal whale hunting in the years since 2010 have resulted in the Faroe Islands government passing a law stipulating that from 2015, only whalers with proper training and license to practice may participate in the hunts.

In addition, our submissions have resulted in whale meat restaurants and public dispensaries now requiring regulatory approval (e.g., Hotel Hafnia and Restaurant Marco Polo in Tórshavn). This was confirmed to us in writing by the prosecutor in Copenhagen.

Yes, we can also demonstrate against whaling directly on the Faroe Islands. The Faroe Islands government may be grateful for an opportunity to have outside legitimacy, to limit whaling and hopefully soon to stop it altogether, without scaring off its own electorate and without losing face.

Yes, we will continue to do everything we can to stop whaling worldwide, including in the Faroe Islands. Every murdered whale and dolphin is ultimately lost to the planet and thus to the consensus of nature and the animal kingdom in coexistence with humans.

No, we do not have to justify protecting parts of the planet from extermination and iniquity. No, we do not have to sit with our butts on our hands and just watch as an autonomous nation like the Faroe Islands slaughter thousands of pilot whales and dolphins irretrievably every year and historically.

No, we do not expect any gratitude if we, together with many other animal rights activists, bring the Faring whalers and their entire nation on to the path of worldwide recognition when whaling is finally stopped.