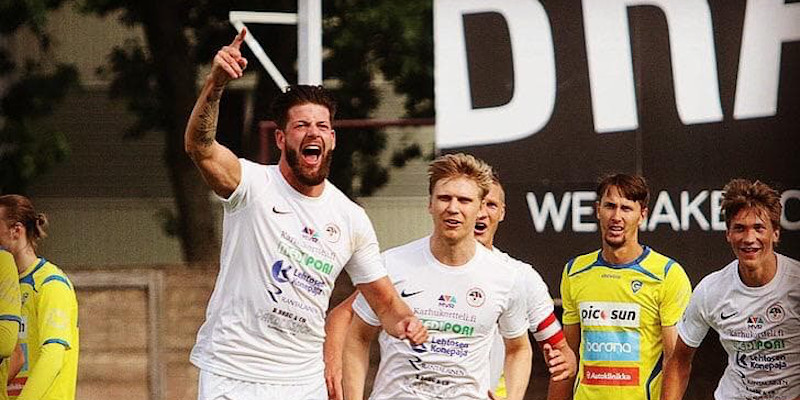 The phrase “competition makes you better” is a common refrain in professional football.

In the case of the Faroe Islands national football team, it has become time for head coach Hakan Ericson to increase the competition at his training sessions by expanding his reach and sending his scouts to Finland to take a look at striker John Frederiksen.

At two meters in height, Frederiksen is an intimidating presence on the pitch and has been a monster in 2020 for Musan Salama (MuSa) in the Ykkonen, the second level of football in Finland.

Commonly known as “The Helicopter,” Frederiksen is dangerous in the air because of his height and leaping ability.

But what does he think about his newly acquired nickname?

“It’s fun,” Frederiksen said. “I just had to learn to live with it and like it.”

A classic goal poacher, Frederiksen has a knack for being in the right place at the right time on numerous occasions during the current season.

In fact, John Frederiksen has already scored seven goals in nine appearances for MuSa, including a brace against KPV and a hat trick against Gnistan.

Currently sitting sixth in the table, MuSa is aiming for promotion to the top flight of Finnish football.

“I have a lot of goals as a footballer,” Frederiksen said. “But with MuSa, my goal is to help the club finish top of the league.”

Hopeful for his first call up to the Faroe Islands national team, Frederiksen continues to play hard and support his fellow countrymen.

“I watch all the matches,” he said. “I listen to all the interviews and I am always following everything closely.”

When looking at the Faroe Islands’ roster, it is interesting to note how much the football culture changed under the tenure of previous head coach, Lars Olsen.

The current Faroe Islands roster has plenty of foreign-based players plying their trade in Denmark, Sweden, and Iceland.

If Frederiksen were to be called up, he would have to compete with the likes of domestic-based strikers Jakup Thomsen of HB Torshavn, Klaemint Olsen of NSI Runavik, and Andreas Lava Olsen of Vikingur.

Despite the depth at the striker position, Frederiksen is only 24 years old and has plenty of upside with his finishing abilities and physicality.

Competition brings out the best in footballers and John Frederiksen is ready to show he belongs on the Faroe Islands national team.

Previous article
The Faroe Islands have had fewer deaths than usual during the pandemic
Next article
COVID-19: Three new cases