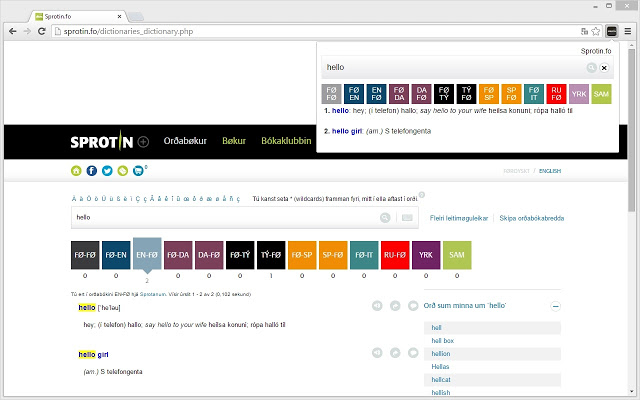 Looking up words in paperback dictionaries now seems like an ancient way of retrieving definitions and translations. Today, this information is found quickly and effortlessly by the click of a mouse. The number of people that use dictionaries provided by Faroese publishing house, Sprotin, has never been higher. The online service had over 50,000 unique users in March.

Jonhard Mikkelsen, director at Sprotin, says the record number of users reflects the importance of the dictionaries for Faroe Islanders and people abroad.

“We use dictionaries like never before,” says Jonhard. “We communicate more and more with the outside world and we are now able to do this in our own language, which we have not been able to previously. Surely, that strengthens our language. It must do something with our consciousness of our own language.”

In 2015, the Faroese government and municipalities across the country agreed to share the total costs of Sprotin’s dictionaries. This made the online dictionaries free for Faroe Islanders and anyone else around the world to use. The dictionaries were deemed vital in preserving the Faroese language and in ensuring the success of Faroese education as a whole. Additionally, unlimited free access might have potentially lead to a larger interest in the Faroese language from abroad.

“Every service that requires a user fee, no matter how small the fee is, would limit our dictionaries to some Faroe Islanders and not all Faroe Islanders,” says Jonhard. “A normal subscription system would fence in our language here in the Faroe Islands. The language would remain unknown to everyone else abroad. Our current system allows the language to spread all over the world. Anyone, anywhere, with an interest can access the Faroese language dictionary and translate Faroese words into eight other languages, and this number continues to rise.”

“How much our user base can grow depends partially on the number of foreigners that use our service,” he says. “It is fun to imagine the opportunities. Our latest dictionaries are the Chinese ones, and those have quite a large potential for growth!”

Previous article
DFI launches new fund that will finance the production of documentary films and TV series from the Faroe Islands, Greenland and Denmark
Next article
Sustainability – Living off the Sea