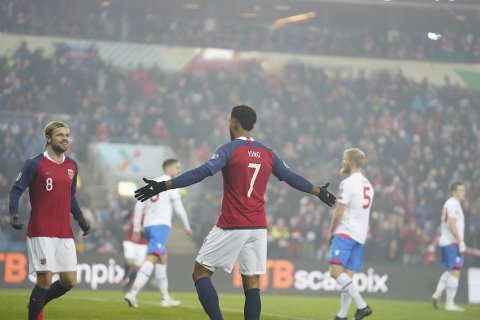 Euro 2020, qualifying, group F: For the fifth time in this UEFA Euro 2020 group, the Faroe Islands conceded four goals in a match, as they were comprehensively beaten by a comfortable Norwegian side. Such a lacklustre showing is synonymous with this Faroese qualifying campaign, but this was debatably the worst performance yet. In a match where talismanic figure Hallur Hansson was missing, you truly got an idea of what the national team looks like without him, and it was not pretty.

Two early goals from Reginiussen and Fossum and a double in the second half from Sørloth allowed Norway to cruise to victory. But truth be told, they could have scored more if they wanted to, instead deciding to take their foot off the gas, and as a result, the final 30 minutes turned into nothing more than a training game.

Little if any positivity can be taken from Lars Olsens and Atli Gregersen’s penultimate match, with the Faroe Islands being extremely sloppy in possession (mustering just one weak shot on target in the whole match, as well as constantly giving away the ball cheaply), as well as abject without it. With all four goals that Norway scored down to basic Faroese defensive errors. It is one thing conceding goals to superior opposition, which is to be expected from time to time but to gift the opposition such easy goals was nothing short of unacceptable.

Such an inept performance is something the 250 or so dedicated Faroese supporters who travelled to Oslo to support the team did not deserve. And I just wish as much hunger and enthusiasm from the players was shown as these endlessly vocal and supportive hearty group of fans.

Below is my player’s ratings:

1) Gunnar Nielsen 6 – a couple of decent saves kept the scoreline down, but was especially weak for the first goal and kicking throughout.

4) Atli Gregersen 4 – night to forget for the ageing captain, outfought and paced by the Norway front-line all match, a couple of last-ditch blocks increased his score slightly.

5) Odmar Færø 4 – looks solid enough in the air and defending crosses, but it is a recipe for disaster making this guy pass out from the back.

6) Heini Vatnsdal 3 – worst match of the campaign so far for Heini, who was criminally beaten in the air for the first Norway goal.

8) Brandur Hendriksson Olsen 5 – always involved, a few nice touches and runs with the ball, but not for the first time this campaign, his misplaced pass lead to Norway’s second goal.

9) Gilli Rólantsson Sørensen 5 – a rare player who at least tried to get forward, but still looked very suspect defensively, which surely answers the questions that he must play in his preferred natural attacking position instead of right back.

10) Sølvi Vatnhamar 4 – quiet match for the ageing winger, who had little impact on proceedings.

13) Rógvi Baldvinsson 3 – asked to play in the Hansson central midfield role and failed miserably, with little pace, energy or quality on the ball, also very weak in the air in the lead up to Norway third goal.

14) Jóan Símun Edmundsson 4 – weak performance from Edmundsson, who had a couple of nice runs, but also senselessly gave the ball away cheaply for the Norwegian fourth goal, and replaced after 70 minutes.

19) Ári Mohr Jónsson 6 – a first international match in 2 years for Ári and he put in a solid if not an unspectacular performance, which was quite impressive considering the overall ill-disciplined team display.

20) Jóannes Bjartalíð 3 – worked hard but with little influence on the match. Had two deliveries from a free-kick and corner, which were desperately poor, and in a match of limited chances, such wasteful play was not needed.

Árni Frederiksberg 5 – played the last 20 minutes, but had little impact on a match which had by then turned into nothing more than a training exercise for Norway.

Klæmint Andrasson Olsen 5 – same as Frederiksberg, little time or momentum to do anything, but picked up a late booking for his troubles.

Kaj Leo í Bartalsstovu 6 – came on for the last 10 minutes, and looked quite positive with a couple of neat touches and runs.

Lars Olsen 3 – a team that was set up awkward tactically, with no attacking outlet. A concerning fifth time this campaign his side have conceded four in a match, and yet another game without a goal (just 4 goals in 9 games), and never even looked like threatening the Norway goal. He set up a team to play out from the back, which was a disaster (he does not have such players at his disposal) and led to 2 out of the 4 goals, and also met the whole match was played in the Faroese half. And the most disappointing aspect is that he chose to leave his legacy with ageing players, instead of giving the next generation such as Andrias Edmundsson, Adrian Justinussen and Meinhard Olsen a game, which would have been a lot more exciting, and beneficial to the Faroese future.