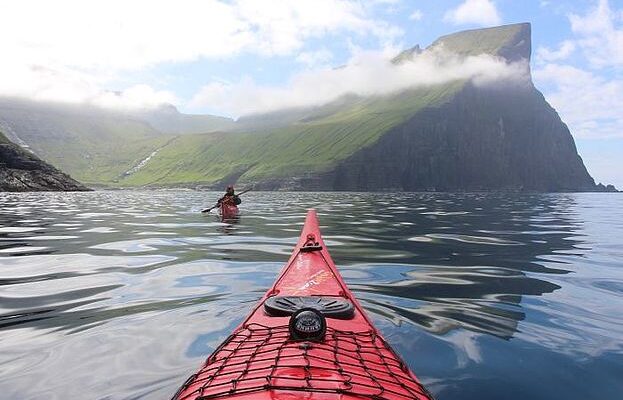 At around 4pm yesterday, the Maritime Rescue Co-ordination Center, MRCC, received a distress call from a kayaker.

A group of nine kayakers had set out from Eiðsvík on the isle of Viðoy but as they ventured north of Cape Enniberg, the northernmost point of the Faroes, they were troubled by rough sea and separated into smaller groups.

MRCC dispatched a rescue helicopter, the rescue vessels, Ejnar Mikkelsen and Tjaldrið, and several rescue boats and other boats to aid the kayakers.

However, moments later they received a second distress call from a fishing boat with engine failure in the sea between the isles of Mykines and Vágar. Another fishing boat was nearby and attempted to tow the distressed boat, but the towing line snapped due to the rough conditions, and so the two men evacuated onto the rescuing boat.

Later a rescue boat of MRCC, Sverri, found the boat and began towing it.

The last kayaker unaccounted for was discovered by the helicopter but was picked up by the boat Búðadal from Haraldssund, which is not one of MRCC’s assets. Both man and kayak were picked up.

The three men which the helicopter came upon first were still in their kayaks, rowing close to land. They were accompanied by Fløtti, a small rescue boat of the Rescue Association of the Northern Islands, to the village of Eiðsvík where the kayaks originally had departed from.

The rescue vessel, Tjaldrið, deployed its MOB-boat and picked up the five kayaks.

Finally, the rescue helicopter carried the five rowers to Klaksvík where they were greeted by medics and police.