New town hall integrated into the landscape of Faroese village 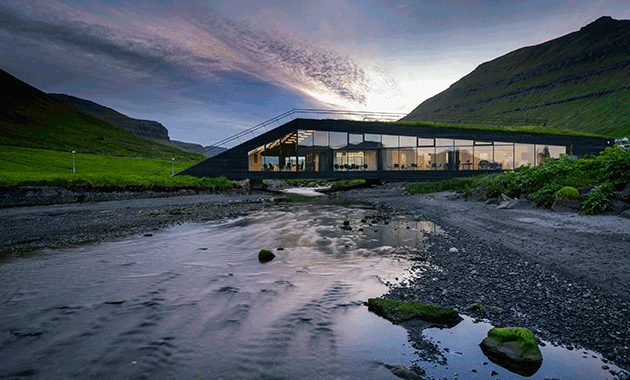 Eysturkommuna has received a new town hall in the village of Norðragøta that cuts into the verdurous landscape of the Faroe Islands. Totaling more than 8.000 square feet, the structure is designed by Henning Larsen with a rooftop adorned with green grass that further ties the building into the Nordic surroundings.

“Many contemporary contributions to Faroese architecture directly copy elements from traditional buildings. I find it much more interesting to look into the underlying thoughts of traditional buildings,” said Henning Larsen Partner and Lead Design Architect Ósbjørn Jacobsen according to contractdesign.com.

He added: “A central theme in traditional Faroese architecture is the blurred line between nature and building, the fact that the spectator has difficulties distinguishing where the landscape ends and the building begins. The primary conceptual idea behind the design of the town hall is driven by the notion of this fleeting line between landscape and building. I believe that could be one way to approach modern Faroese architecture.”

Ósbjørn has been a key figure in Henning Larsen’s positioning in the North Atlantic market since his start with Henning Larsen in 2000. In 2013 he was appointed responsible partner and Design Director for Henning Larsen’s office in the Faroe Islands. With his unique understanding of the Nordic societies and nature, coupled with an ability to create visionary concepts, he has made an indelible mark in Iceland, the Faroe Islands, and Denmark.

From 2004 until its completion in 2011, Ósbjørn was the design director for Harpa Concert Hall and Conference Center and the master plan for the eastern part of Reykjavik Harbor.