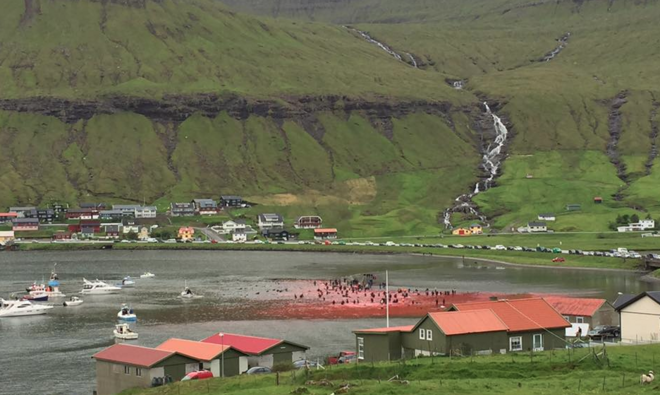 More than 100 white-sided dolphins and pilot whales were herded and killed in Hvalvík on the island of Streymoy yesterday, report several Faroese news websites.

Dagur.fo writes that “a lot of people gathered on Hvalvík Beach to witness the killings which went fast and smooth.”

Tuesday’s hunt was filmed by Sea Shepherd, which has campaigned to end killing of dolphins and whales in the Faroe Islands.

Daily Mail explains that “whale driving on the Faroe Islands date back to the late 16th century and involve residents herding pods of whales into shallow waters.

They are then killed using a ‘spinal lance’ that is inserted through the animal’s neck to break its spinal cord.

However, today’s (yesterday’s) hunt appears to have been carried out using both spinal lances and normal knives, which is likely to be a slower and more painful process,” adds the British newspaper.