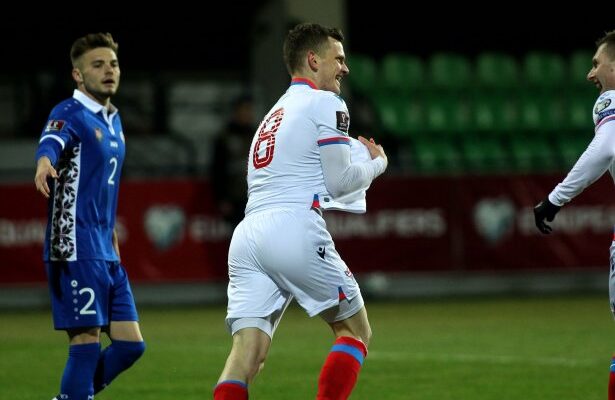 Meinhard Olsen’s late deflected effort was enough to ensure the Faroe Islands increased their unbeaten run to a personal record of 7 competitive matches. Proceedings did not start well, as Nicolaescu seized on Nattestads poor back pass after just 9 minutes to put the home side ahead.

But throughout the tie, the Faroese side was worthy of at least a draw, with 59% of possession (a feat I am not sure many Faroese teams have had many times before). This was a prime example of the passing ideology that Håkan Ericson has instilled in his players, with the Faroese players completing 496 passes (compared to Moldova’s 359) and pretty much dictated the game from start to finish. Even when time was running out, the team still showed composure and calmness on the ball, as well as the character not to let their heads drop after a dreadful start. Here are my player’s ratings:

1) Gunnar Nielsen- 6/10– Not much to do for the veteran goalkeeper recalled to the side, might have been disappointed with the goal, as it was at his near post. Plus, some iffy spills from long-range shots that lucky went unpunished, but he’s kicking and experience were valuable throughout.

9) Gilli Rólantsson- 7/10– Solid game from the versatile right-back, who got up and down the flank tirelessly and put in some real dangerous crosses

4) Odmar Faero- 5/10– Sadly went off injured after just 40 minutes, after an injury sustained early on, and never looked like his usual bullish self after the incident. He will be disappointed not to put a better challenge on Nicolaescu in the lead up to the goal.

5) Sonni Nattestad- 5.5/10– Calamitous start from the centre-back with the backpass for the Moldovan opener but showed great spirit to bounce back and improved as the match went on.

3) Viljormur Davidsen- 7/5-10– Composed performance from the undisputed left-back, his impressive coolness with the ball is a perfect match for Ericson’s ball-playing ethos.

10) Solvi Vatnhamar- 6/10– Quite game from the industrious veteran, but his hunger and dynamism will always be an asset for the side.

6)Hallur Hansson (C)- 7.5/10– Booked early on, so maybe he couldn’t play as aggressively as he usually does, but still a hardworking, influential display by the talismanic captain. The heartbeat of the Faroese side.

16) Gunnar Vatnhamar- 6.5/10– Worked hard throughout the contest, and always a danger from set-pieces. Maybe beaten at times by Moldovan midfielder Artur Ioniță, but there is no shame in that, as he’s a 200 capped Serie A player.

8) Brandur Olsen- 8/10– The creator of this Faroese side and player who can produce a moment of magic, as he did with the assist for the equaliser. The only disappointment is a few below-standard efforts on free-kicks; as we know, Brandur has the spectacular ability to put them away!!

14) Jóan Símun Edmundsson- 7/10– Impressive display from the Bundesliga man, who showed some intelligent movement and touches. Considering it was his first match since October as well, he can be pleased with his output.

11) Klaemint Olsen- 5.5/10– Night to forget for the big man up top, and despite a lot of effort, could not impose himself into the game at all.

15) Heini Vatnsdal- 7/10 (on 40 min)- Came on in difficult circumstances just before half-time and had a solid match. He kept a clean sheet and gave minimal openings to the Moldovan front line.

7) Jóannes Bjartalíð- 6.5/10 (on 69 min)- Added some much-needed energy and impetus to the Faroese front line, without having any distinct stand out moments.

19) Ári Mohr Jónsson- 6.5/10 (on 78 min)- Akin to Bjartalíð, gave the tiring Faroese side some vital energy and is becoming a real essential member of the squad.

18) Meinhard Olsen- 7.5/10 (on 78 min)- The Faroese hero on the night bagged his first senior international goal and will be putting the pressure on Ericson to start the next match.

Manager- Håkan Ericson- 8/10– They say a manager shows his worth with his tactics and substitutes, and the fact that one of Ericson’s subs scored the equaliser is testament to the coach’s decisions. Set up with a positive formation, never allowed his players to lose their cool, and made the right changes at the appropriate moments.