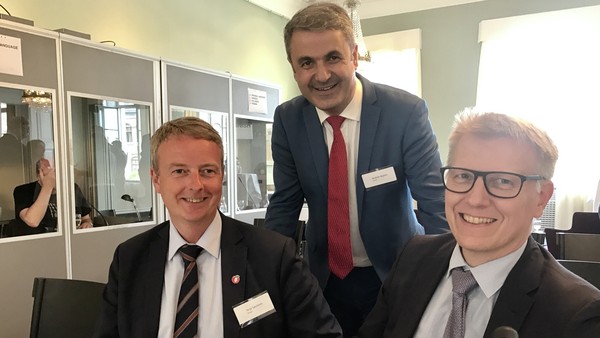 Nordic energy ministers are urging private businesses to develop proposals that will boost the export of Nordic solutions for sustainable energy. Their call is part of a letter to the private sector written by the ministers.

The energy ministers agreed on the content of their letter at a meeting in Lund, Sweden, on 22 May. The letter, signed by the energy ministers of all five Nordic countries, the Faroe Islands, and Åland, invites Nordic businesses to come up with specific proposals for how to boost the export of Nordic energy technology and system solutions.

“The Nordic countries are world leaders in climate-smart energy and it’s a fact that this is something that Nordic businesses can benefit more from. We’re seeing that major international players in the energy sector are now investing heavily in sustainable solutions, which means competition is rapidly increasing. In the Nordic Region, we need to work together more closely to maintain our competitive edge if we’re to remain world leaders,” says Sweden’s Minister for Policy Coordination and Energy, Ibrahim Baylan, who is the chair of the Nordic ministers for energy in 2018.

The letter will be sent to selected industry organisations in each country. The hope is that the business community will have prepared its proposals in time for the Nordic energy ministers’ meeting in Iceland next year.

The background to the ministers’ invitation is a report on the future of Nordic energy co-operation commissioned by the Nordic Council of Ministers, and written and published last year by former Nokia chief Jorma Ollila. One of the report’s proposals concerns a joint Nordic export strategy driven by the national trade and industry organisations.

“I’m pleased that the energy ministers and stakeholders in the energy market so keenly endorse Jorma Ollila’s report. This demonstrates that the reviews that have been and will be conducted in various sectors of Nordic co-operation play an important role and make our co-operation more politically relevant and effective. We are stronger when we work together to address the challenges faced by the climate and global competition in clean energy solutions,” said the Secretary General of the Nordic Council of Ministers, Dagfinn Høybråten.

An energy-filled week
The Nordic ministers held this year’s annual meeting in connection with an intense week in the Öresund region on the subject of energy. During the week, energy ministers from the world’s largest economies gathered in Copenhagen and Malmö within the context of the Clean Energy Ministerial (CEM9) and Mission Innovation (MI3) co-operative bodies which, in addition to the Nordic countries, include all G20 countries. In addition, a series of energy events under the name Nordic Clean Energy Week are being held throughout the week.

The Nordic countries and Nordic Council of Ministers are co-hosting CEM9 and MI3 with the European Commission.

This article was originally published on Norden.org