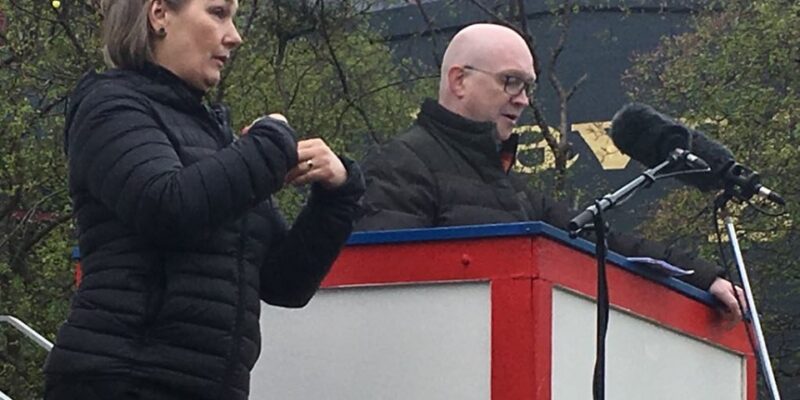 A few hundred people gathered at Vaglið Square outside the Faroese parliament for May Day.

The Faroese economy is in very good shape right now. The unemployment rate is the lowest it has ever been, and earlier this year the Faroese population reached a new record high.

Hence, the three main speakers – Mr. Marius Rein (the former general secretary of the Faroese parliament), Ms. Karin Kjølbro (a former Republican Party MP) & Mr. Súni Selfoss (the current CEO of The Union of Salaried Employees) – chose rather wisely not to lash out at the current government – as is often the norm at a May Day rally in the Faroe Islands.

Instead, the three speakers primarily focused on key events in Faroese labor history, albeit Mr. Selfoss emphasized that the class war is far from over.

“The labor unions have never faced a bigger challenge than today as the labor market already is, and is only going to become more unpredictable and unsafe than it has been for a very long time,” Mr. Selfoss noted.

“A new term, the precariat, has come to dominate labor market in the Western World. There are people who are suffering from precarity, which is a condition of existence without predictability or security. These people hold unsafe & temporary jobs and live in a state of constant uncertainty about their future.

“It has never been more important for people to join unions and for the unions to get ready to face new challenges in a rapidly changing labor market,” Mr. Selfoss stressed.