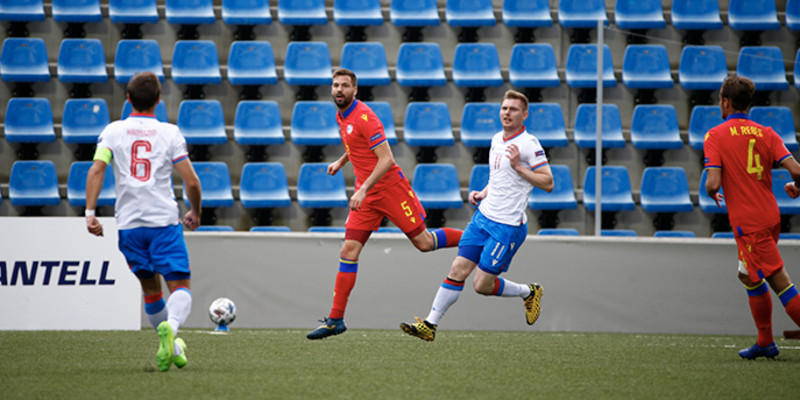 The Faroe Islands produced a deserved win in Andorra, which means that the national side has now won 2 competitive games in succession for the first time since 1997 (only second time in the nation’s history). It was also the first competitive away victory for the team in nearly 4 years, and the sense of relief and elation was truly felt at the full-time whistle.

In testing conditions at the ‘Estadi Nacional’, thanks to torrential rain and a poor playing surface, the Faroes controlled the scrappy affair from start to finish. The disjointed flow of the match was down to the Andorran players going down at any opportunity, and the ref frequently halting play, with the award of cheap free-kicks throughout (32 in total!), especially from Faroese corners and set-plays. As a result, it was a stop-start tie, which in truth seemed to be Andorra’s only tactic to get something from the game.

Nonetheless, such a poor gameplan didn’t affect the Faroese players who dominated throughout, and when allowed, produced an impressive free-flowing passing style, with 74% possession (not something the Faroes have done many times in the past!).

In the starting 11, there were 3 changes from the win against Malta, with Patrik Johannesen coming in for Meinhard Olsen on the wing, Gunnar Vatnhamar replacing his brother Sølvi. With the same 4-3-3 that we saw against Malta deployed. And Teitur Gestsson deputising for Gunnar Nielsen in goal. Gestsson was pretty much a spectator for the whole match, with Andorra not registering even 1 shot on target, a testament to the Faroe Islands defence and overall control of the game.

Another reason for the home sides lack of attacking threat was due to their setting up with 10 men behind the ball, in the hope that the Faroe Islands would get frustrated and unable to break them down. And for the first 30 minutes, this tactic was working, with chances at a premium.

However, the Faroese players remained calm, and in the 31st minute, captain Hallur Hansson drove into the box and crossed for striker Klæmint Olsen, who cutely flicked the ball past the Andorra keeper, who will be disappointed he didn’t keep the effort out. Olsen now has 2 in 2 for the national team, a tremendous rise, considering before this week he had just 1 goal in 28 appearances at international level.

Despite being a goal down, Andorra still decided to sit back, meaning the Faroese players kept the ball and passed it around with relative ease. On the 57th minute, the lead was almost doubled, when Brandur Hendriksson Olsen long-range, low piledriver was superbly tipped around the post by the stretching Andorran goalkeeper. And again the score was nearly extended in the 80th minute, when substitute Meinhard Olsen, shot just wide following a fantastic passing move.

The rest of the match was seen out with calm and confident professionalism by every Faroese player, and Andorra never looked like creating a chance, let alone restoring parity. Andorra tried there best to make this tie a non-contest, shown in the remarkable statistic that they completed just 188 passes, compared to the Faroe Islands 558, but today football came out on top, and the Faroes gained a justified win. Here are my matchday ratings:

12: Gestsson 7/10 Quite game for the deputising keeper, who had little to do but dealt with everything competently.

3: Davidsen 8/10 Another high performance from the left-back, who is always a bastion of calmness and confidence. Got up and down the wing tirelessly throughout.

5: Nattestad 9/10 Classy display by the towering centre-back, defended everything with ease, and is a fantastic outlet with his pinpoint long-range passing. MOTM

4: Vatnsdal 8/10 Dealt with any Andorran foray forward with comfort, and like his fellow centre back Nattestad, is a vital player in Ericson’s operating out from the back system.

2: Danielsen 8/10 The right-back battled throughout, and never let the Andorran players bully him. He also worked extremely hard up and down the right-hand side from start to finish.

8: Hendriksson Olsen 8.5/10 Controlled the midfielder with his fantastic ball retention, positive passing game, and ability to find pockets of space.

10: G. Vatnhamar 7.5/10 The lesser-known Vatnhamar brother came into the defensive midfielder, and did a good job, recycling possession, and keeping his game simple, and distributing the ball to the creative players.

6: Hansson (c) 9/10 A all-action captains performance, Hallur covered every blade of grass, was always available to receive the ball, a vital player in transitioning the game from defence to attack, and maintaining the high press. Also got a well-deserved assist with the goal.

14: Johannesen 7/10 Came in after an impressive cameo against Malta and was relatively quiet, but when he did get the ball, looked strong with his physicality and burst of speed.

11: K.Olsen 8.5/10 Another goal for the big man up top, he yet again led the line excellently with his hold up play. Justifiably tired as the game went on.

7: Bjartalíð 7/10 Pretty quiet game for the KÍ captain, but still worked tirelessly for the team throughout, and tracked back well to stifle any Andorran attacks.

A. Olsen (32 minutes on for Johannesen) 7/10 Not quite the same impact as the last match, but still worked hard to ensure the high attacking line did not drop deep.

M. Olsen (18 minutes on for Bjartalíð) 7/10 Added some much-needed energy when introduced, and nearly capped off a stunning move with a goal.

Andreasen (3 minutes on for K.Olsen) N/A Not on long enough to get a score, but still a proud day for the midfielder, who made his international debut.

Håkan Ericson 9/10 Implemented a positive passing out from the back gameplan, which Andorra was unable to compete with. Smart move to bring in Vatnhamar and Johannesen whose added height worked perfectly against Andorra’s long ball gameplan. The mentality of assurance and control, in which the Faroese player’s managed the game was also a huge positive, in which Ericson must take a lot of credit for.

After the match, I spoke with goalkeeper Teitur Gestsson, and when questioned about being a last-minute replacement for the first-choice keeper, Gunnar Nielsen said: “I was completely ready for the match, and it felt really nice to be selected.”

Furthermore, on reflecting on the game, Getsson stated “I am very happy with the three points we got in a difficult away game. Before the match, we knew that Andorra is a team that does not score so many goals and plays close matches, even against the best teams. So I am glad the team kept them down to 0 shots on goal”.

Håkan Ericson now has 2 wins out of 2, the perfect start to his tenure in charge. Next up in the Nations League is the home doubleheader against Latvia and Andorra in October. And thanks to the back to back victories, we can look forward to the upcoming fixtures, with a sense of anticipation and optimism. Which has not occurred with the national side in recent years!!