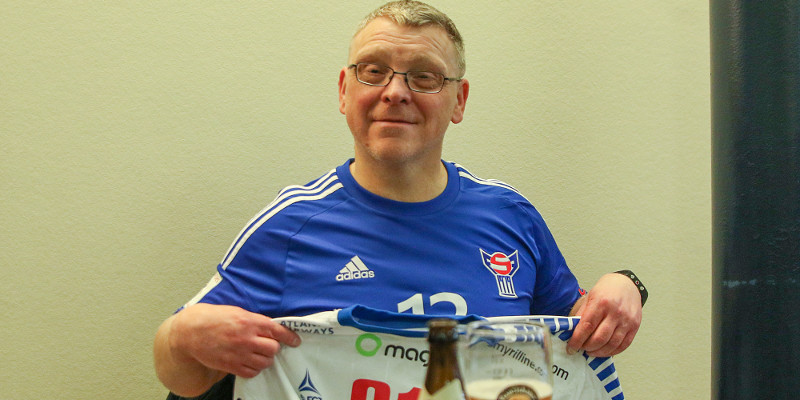 – I really like following the Faroese at sporting events. The Faroese are so friendly and approachable. In Germany there’s more of a distance between fans and athletes. The Faroese come over to greet me.

Martin Schürmann from Germany has come to Luxembourg to support the Faroese national handball team as they play their European qualifying matches for the 2021 World’s Men Handball Championship. The Faroe Islands played against Luxembourg, Slovakia and Lithuania.

Martin, who admits that he prefers football to handball, is one of the Faroese national football team’s biggest supporters outside of the Faroe Islands. He is spending the entire weekend in Luxembourg, supporting the Faroese team, and he dressed for the occasion – in a Faroese football jersey.

While Martin was being interviewed, one of the Faroese supporters came over to hand him a white handball jersey.

– You should wear this instead – it’s yours, he told a speechless Martin.

– This is exactly why I like supporting the Faroe Islands, he says.

Martin first started showing an interest in the Faroese national football team when they won against Austria in Landskrona, Sweden back in the day. Back then he had no idea what the Faroe Islands even were, but he had to find out, and he has been following the Faroese team ever since. He watched his first ever match in 2001 – also in Luxembourg. The Faroe Islands ended up winning, and after the match, one of the players gave him his jersey. Since then Martin has witnessed a number of football matches all over Europe, and he has also visited the Faroe Islands four times.