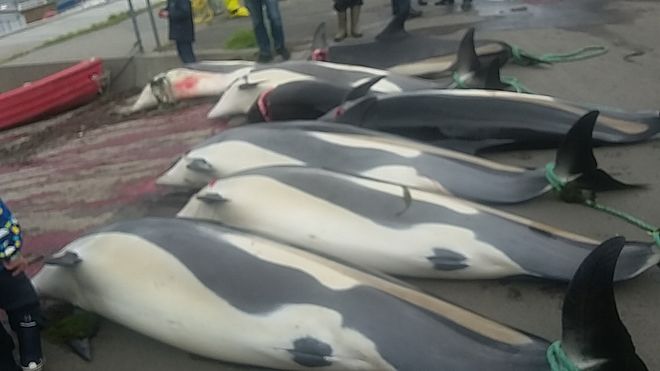 It appears that a majority of Faroe Islanders are against the practice of dolphin hunting.

In an online poll on Faroese news website VP.fo asking Faroe Islanders whether they support the hunt of white-sided dolphins, 60% of respondents replied “no”, 37% replied “yes”, while the remaining few were unsure.

This comes after Tuesday’s slaughter of 210 white-sided dolphins, which took place in the village of Hvalvík.

The slaughter has been much criticized by international news outlets as well as several Faroese politicians – including former PM Kaj Leo Holm Johannesen and Bjørt Samuelsen, who represents the Republic (Tjóðveldi) in the Faroese parliament.

Mr. Johannesen wrote in a Facebook post on Wednesday:  “I think we should continue to herd pilot whales, but today I think we made the wrong decision to kill dolphins…Nicer and smarter, dolphins are friends with kids all over the world – kids who are going to eat our fish and salmon. This is very unfortunate branding of our country.”

Ms. Samuelsen also voiced her disapproval of the slaughter. She wrote in a reader’s letter: “No one who has seen the pictures from the dolphin slaughter can doubt that grave breaches of the “whale law” (grindalógin) and the “animal protection law” are committed.

And when that happens, it is not possible to just shrug one’s shoulders. We cannot ignore threats of trade boycotts, if we give the international society the perception that we are primitive barbarians,” Ms. Samuelsen stated.