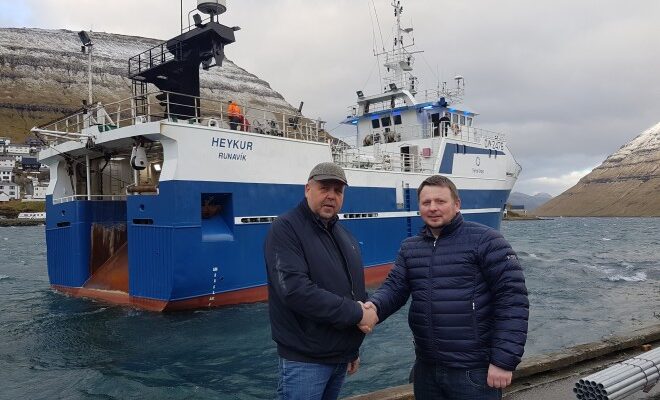 With a new slipway completed and a new workshop hall underway, Klaksvík’s repair yard KSS delivers more and more electrical powered winches—considering the use of apprentices part of a longterm strategy.

Klaksvík repair yard KSS could celebrate a major step forward with the completion of its new 1500-tonne capacity slipway in 2016. The new slipway, with a capacity to haul up the majority of the active domestic fishing fleet in the Faroe Islands, only excluding the largest trawlers, represents a significant upgrade of the yard, which has seen remarkable advances in recent years.

On a separate note, KSS has its own approach to boosting workforce skills and competencies, placing emphasis on longterm market development in the process, according to CEO Frimodt Rasmussen.

At the core of the company’s policy to strengthen employee capabilities is the employment of a relatively high number of apprentices, currently 23 of them—that is, roughly one-third of the workforce. The KSS management has long come to realize that in order to stay relevant in the competition for repair and overhaul customers, a good geographical location and modern equipment is not quite enough—good craftsmanship and a longterm employee strategy are essential, too. Every year, four to five KSS apprentices become fully trained craftsmen.

“We are generally aiming at retaining one of every 10 apprentices we hire,” Mr. Rasmussen said. “The apprentices are crucial to our recruitment process, and a critical part of our longterm strategy for building awareness, which in turn is necessary for expanding and consolidating the yard’s domestic market position.”

As he points out, well trained and skilled employees play a vital role with regard to the company’s future growth.

“Our experience is that young men, typically, who have grown tired of school, make remarkable progress once they become apprentices,” Mr. Rasmussen said. “As they go on to learn a wide range of valuable skills, they become more confident with their own abilities; so for everybody it’s a win-win situation, whether it’s KSS, our apprentices, their colleagues, our clients, the local community or society in general.”

In recent years KSS has increasingly become a viable option for vessels in the Faroe Islands and the wider Northeast Atlantic, with new orders received more frequently than ever before. The yard provides an array of services and solutions for all types of ships, focusing squarely on top-quality work and quick service, whether for maintenance, repairs, alterations or overhauls. With its capacity growing under the leadership of Mr. Rasmussen, the recognition enjoyed by the business has clearly been raised to a new level.

The Faroe Islands’ central location in the triangle between Scotland, Iceland and Norway is close to main shipping routes as well as some of the best fishing grounds in the North Atlantic. Located in Klaksvík, Faroe Islands’ second largest town with a deep natural harbor and a wide array of maritime services, KSS is able to present compelling arguments to owners and operators of vessels needing repairs and maintenance. With long experience in the trade, and a history going back to the 1920s, KSS has developed a particular competitive strength in, for example, key aspects of engines and hulls.

“KSS has a proven record with general repairs and fitting out ships ranging from fishing boats and offshore support vessels to car and passenger ferries, even yachts, bulk freighters and workboats including tugs and fire boats,” Mr. Rasmussen said. “Not least because of this, we have seen healthy and ongoing business growth over recent years.”

Much of this growth has taken place within the domestic market, yet KSS is meanwhile making strides in establishing new business relations in neighboring countries.

The company is agent and service partner for Spain’s Ibercisa in the Faroe Islands as well as in Denmark, Greenland, Iceland, Norway, Sweden, the United Kingdom and Ireland. Ibercisa is a major international brand in deck machinery equipment, in particular when it comes to electrical powered winches, and feedback from customers who have opted for these winch systems has been overwhelmingly positive, according to Mr. Rasmussen.

“Both Faroese and foreign fishing vessels are increasingly discovering the benefits of the Ibercisa electrical trawl and purse seine winches,” he said.

“Traditionally, hydraulically powered winches have been the solution of choice for most of our customers. With the latest technological breakthroughs, however, electrically powered winches seem to be winning over the hearts and minds of many, and are now getting a lot of positive notice. It seems people everywhere are looking at the electrical option so this technology is clearly gaining traction.”