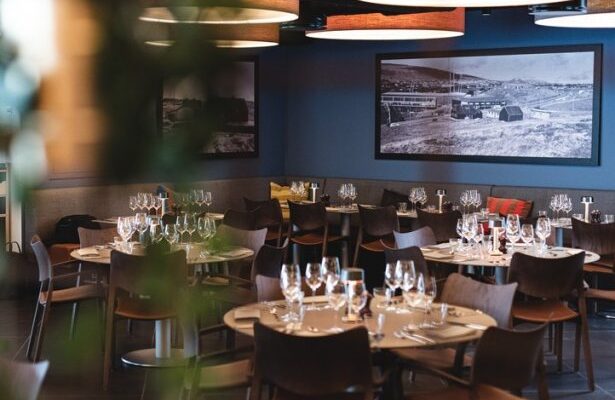 In July, the doors to Smyril Line’s new hotel in Tórshavn, Hotel Brandan, were opened for guests, and on Monday this week, so were the doors to the hotel’s new restaurant.

Open every evening from 6pm, the new restaurant has been named Húsagarður after the old farm once located on the very spot where the hotel now is situated.

“The old farm has a special place in the capital,” the owners noted in a statement. “For seven decades the farm was located at Húsabrúgv, east of the cathedral of Tórshavn. Then in 1939 Húsagarður was moved to the area near Gundadalur, as the town centre had become more crowded with the capital growing.”

“Once moved, the farm became so remote that the area was nicknamed Mexico,” we’re told. “But history repeated itself, and before long the town swallowed the new farm as well.”

True to that tradition, Hotel Brandan opted to preserve or reuse old geographical names associated with the locality, with meeting rooms and other facilities likewise named accordingly.

At Húsagarður, only top quality Nordic produce is used, head chefs Rannvá Beder and Janus Einar Sørensen said. Guests can choose their wine from the restaurant’s own spacious wine cellar, known as Gilið, which is to contain about 3,000 bottles.

Starter courses at the restaurant will include lobster, turnips, beef and cod. Thematically influenced by the story of Húsagarður, main courses include smoked lamb, beef tenderloin and monkfish. Available for dessert is an array of nut ice cream, chocolate and mousse with whey, meringue and Mazarin cake.