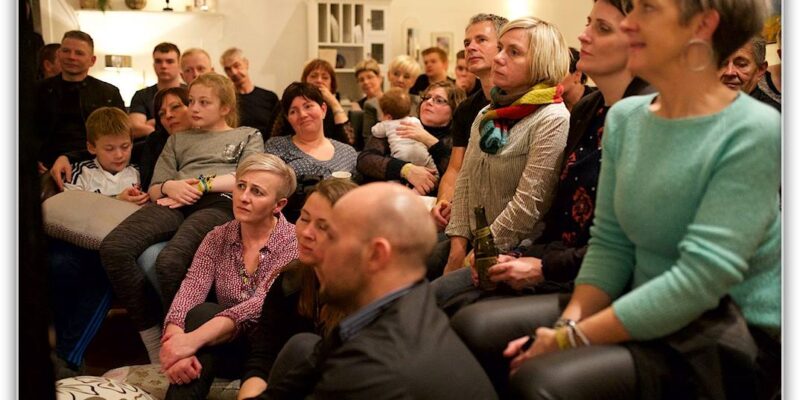 HOYMA takes place in Göta, home of G! Festival. Put very briefly HOYMA is concerts in people’s homes. 20 concerts by 10 different artists take place in the livingrooms of 10 different family homes in Southern Göta (Syðrugøta). 2 concerts in each home. There are no sound or lighting systems used.

According to Jón Tyril, founder of HOYMA and former organiser of G! Festival, the idea for HOYMA started growing already in 2007, after G! Festival went financially bust. “I was exhausted from struggling with the big machinery behind the music festival: All the budgeting, sound and light systems, stages, security, negotiations of this and that kind and so on and so on. And a lot of this same machinery also creates a huge distance between the performer and the audience. I realised that many of my most powerful music experiences had been in small and humble circumstances. My drive to make something small, more intimate and authentic became stronger and stronger. I wanted to get back to basics. To cut away the distance between the audience and the performer and establish as powerful a connection as possible between the two. What better way to do this than to get rid of the technology and set the stage right in the home of the audience? The working title of the event was initially Anti Festival, but it developed first to Heimafestival (Home Festival) and then to the final brand name HOYMA which is a derivation from the Faroese word for home “heima”, but spelled not according to correct grammer but rather to how it is pronounced in the local Göta dialect.”

HOYMA combines two important and age old elements of Faroese culture. The concept of húsagonga, where you go from house to house to visit each other on special occasions, and utilizing the living room that was central to the preservation and creation of the Faroese language, storytelling and singing traditions for centuries, when the Faroese language and culture was not officially appreciated by the authorities.

The first HOYMA was held in 2013 and the event has been held annually since then. In 2014 HOYMA was a awarded a special prize at the Faroe Islands Music Awards for “Best new innovation/ Best thinker”. Already in April 2014 HOYMA saw it’s first sister event, HEIMA in Hafnafjørður in Iceland. Since then there have been established several events with inspiration from HOYMA: Heima on the island of Nólsoy, Húsagongd in Sandavágur and HEIM in the village of Bårup in Denmark and Heima in Keflavík in Iceland.