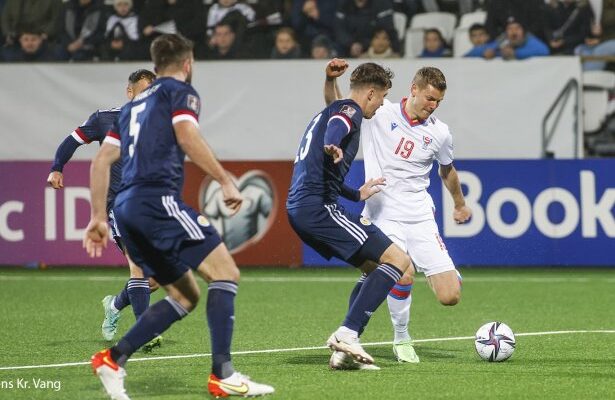 The Faroe Islands suffered an all too familiar heartbreaking late defeat at the hands of Scotland. Scotland’s controversial winner with just 3 minutes of normal time to play was just about enough to beat a heroic Faroese performance.

The first half saw the Faroe Islands come closest to scoring and on several occasions too. Firstly, after Jóan Símun Edmundsson scuffed a glorious chance. And then Ári Jónsson’s close-range effort was denied by a stunning point-blank save from Craig Gordon.

The Faroes first half was extremely impressive. The team really took the game to Scotland, in what was debatably Håkan Ericson’s greatest half of football since taking charge. The players were not intimated in facing such stars as Robertson, Tierney, Mcginn and Mctominay.

The second-half saw Scotland up their game somewhat, with Gestsson producing top saves from Gilmore and Mcginn. But the Faroe Islands were still comfortable and even had chances of their own. Notably, when Gilli Rolantsson turned Andy Robertson inside out before cutting back to Hallur Hansson, who whipped just wide from 18 yards.

The game looked like it was heading towards a hard-fought draw. That was until with normal time almost up, Nathan Patterson whipped in a cross from the right; Horour Askham cannoned the ball off Lyndon Dykes chest and into the net. VAR examined whether Dykes had diverted home with an arm, which looked like a close call, but to no avail. A fortuitous goal for Scotland, a heartbreaking one for the Faroes.

Even the most ardent Scottish fans would have admitted the Faroes deserved at least a draw, which speaks magnitudes of how the minnow nation performed. And we can take great pride in such a noble display against a good side. Sadly football is not always a fair game, a saying the Faroe Islands understand well too often of late.

Below are my player ratings

12) Teitur Gestsson: 9/10 — With every match, Teitur is affirming his place as the number one goalkeeper. A calming presence in goal, with impressive kicking and 3 or 4 important saves.

9) Gilli Rólantsson: 8.5/10 — Much improved performance down the right, more effective defensively and offensively with the back five system. Unlucky not to get an assist with the Jónsson chance.

15) Odmar Færø: 7.5/10 — Commanding and committed display as always, if not slightly awkward on the ball, on the right of a back three, in a changed formation, might be slightly annoyed to let Dykes get in front of him for the goal.

5) Sonni Nattestad: 8.5/10m — Won everything in the air against a physical Dykes, should have scored with a free header from a Hendriksson cross.

3) Viljormur Davidsen: 7.5/10 — Reliable as always, before being replaced early in the second half.

5) Heini Vatnsdal: 8/10 — Seemingless fitted into the side and looked convincing before sadly being replaced due to an injury.

16) Gunnar Vatnhamar: 8.5/10 —Another enthusiastic, resolute display in the defensive midfield role. He was all over the pitch and with every game cementing his importance to the side.

8) Brandur Hendriksson: 9/10 (MOTM) — Amazing passes and vision (especially the cross for the Nattestad chance and the exquisite through ball to Rólantsson for the Hansson). Against a Premier League midfield, he did not look out of place.

6) Hallur Hansson (C): 9/10 — Like Brandur, he looked at home against a Premier League midfield, influential as always, and covered every blade of grass, a true captains display.

19) Ári M. Jónsson: 9/10 — Has done his chances no harm in the last two fixtures, so unlucky not to score, and defensively, handled Fraser fantastically all game.

14) Jóan Símun Edmundsson: 7.5/10 — Worked hard all game, with some decent link-up play, will be disappointed in fluffing a massive opportunity early on.

21) Petur Knudsen (for Davidsen 59th minute): 7.5/10 — Some impressive mazy runs and kept the ball well when possession was at a premium.

Coach Håkan Ericson: 8.5/10 — Great tactic to move to a back 5, which allowed the full-backs, Brandur and Hallur more freedom offensively. Set the team up positively, not just to sit back, but take the game to Scotland, excruciatingly almost paid off.

Regarding the game, forward Petur Knudsen stated, “Unlucky is not the right word to use, because it has happened so often that we can’t just say every time that we are unlucky. We need to improve offensively and defensively so that we score more goals and, on the other hand, don’t concede.”

Captain Hallur Hansson said, “It was a shame that we didn’t get more out of these two games. If we want to play at this level with the big nations, we have to take our chances when we get them because you can’t expect to get 5-6 big chances against top-class teams. But I’m proud of the work we do. Especially when we look at the physical data, we outrun most teams both overall and in high intensity running. If we keep doing that, results will come, so I’m very optimistic.”

Next up for the Faroe Islands is Denmark away, on the 12th of November.