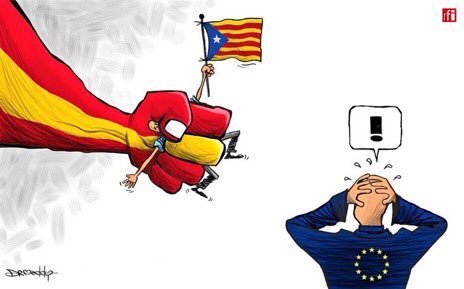 Magni Arge, who represents Faroese political party Tjóðveldi (the Republican Party) in the Danish parliament, has urged European politicians to demand dialogue between Madrid and Catalonia after the former Catalan leader Carles Puigdemont was detained in Germany on Sunday, five months after entering self-imposed exile from Spain, where he faces up to 25 years in prison for organizing a referendum on Catalan independence last year.

Puigdemont had entered Germany from Denmark after leaving Finland on Friday when it appeared that police would arrest him there and begin an extradition process requested by Spain.

The detention threatens to worsen the Catalan crisis that flared last year when the region made a symbolic declaration of independence, prompting Madrid to take direct rule, writes Reuters.

Reuters adds that Spain’s Supreme Court ruled on Friday that 25 Catalan leaders would be tried for rebellion, embezzlement or disobeying the state and reactivated international arrest warrants for Puigdemont and four other politicians who went into self-imposed exile last year.

Magni Arge originally invited Puigdemont, who was in Copenhagen on a visit in January, to come to the Faroe Islands this spring.

– We want to schedule this visit before Easter. But of course, it depends on the political situation in Catalonia. We shall see how it fits into his schedule – and we shall also see whether he will come as a private citizen or as the Catalan leader, Mr. Arge said according to Faroese news site in.fo back in January.

Mr. Arge also pointed out back in January that ”it has come to this there (in Spain) that you are put in prison for serving your political interests. It is completely beyond comprehension, from our point of view. Hence, our circumstances (the political relations between Denmark and the Faroe Islands) are of interest to politicians there. And I do not understand Danish politicians that they are just willing to stand behind (Mariano) Rajoy. How come they do not step forward and explain them how they solve these kind of situations in Denmark”.