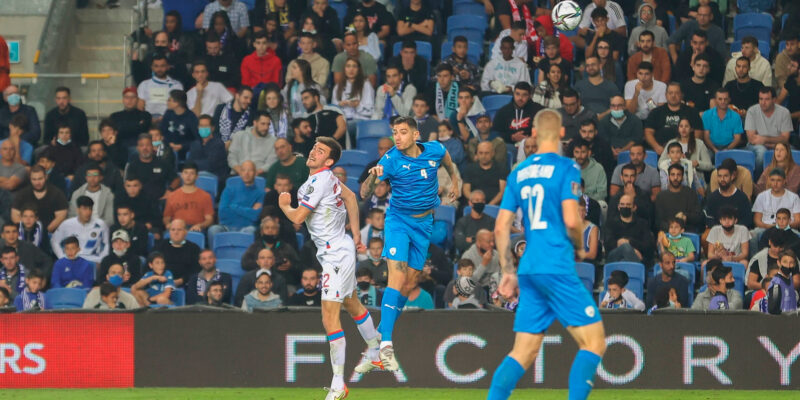 A brave Faroese side went down 3-2 to a clinical Israel in an action-packed match on November 15th at Natanya near Tel Aviv. Håkan Ericson made two changes from the 3-1 defeat to Denmark in Copenhagen on November 12th, with Brandur Hendriksson replacing Gunnar Vatnhamar and keeper Gunnar Nielsen deputizing for Teitur Gestsson.

The open period was a quiet affair, with Gunnar Nielsen making a brilliant save from a Daniel Avraham shot being the only effort of any note.

Nonetheless, Israel opened the scoring on the 30th minute after a farce of a penalty was awarded against Odmar Færø for handball, despite having his back against the ball. A disgraceful decision that exposed the ugly side of VAR, much to the dismay of the Faroese players and coaching staff.

Israel doubled the lead on the 58th minute through Shon Weissman after the Faroese defence fell asleep at a set-piece routine.

But the Faroes Islands were not to be deterred and pulled a goal back four minutes later when Israel goalkeeper Ofir Marciano pushed a Brandur Hendriksson piledriver into the path of Klæmint Olsen, who intelligently squared the ball to Sølvi Vatnhamar to tap into an empty net, for his first competitive international goal.

Then on minute 72, pandemonium erupted when Klæmint Olsen lept above two Israeli defenders to head into the bottom left corner, after a great run and cross from René Joensen down the right-hand side. The goal means Olsen has drawn level with Rógvi Jacobsen in the Faroese all-time goalscorer, with 10 goals.

The rest of the match was an end to end affair, with Gunnar Nielsen making a sensational save from Manor Solomon. The Faroes tried everything to draw level again but sadly pulled up just short.

However, the players can still be proud of the effort and character against a decent Israel side.

1) Gunnar Nielsen: 8/10 — Has given Håkan Ericson a selection dilemma between the sticks after an impressive game with 3/4 top calibre saves.

3) Viljormur Davidsen: 7/10 — Solid and dependable as ever, without being as offensively effective as he usually is.

5) Sonni Nattestad: 6.5/10 — He was surprising taken off early in the second half. Produced a standard Sonni physical display and won most aerial duels, but maybe lacking a little match sharpness.

15) Odmar Færø: 6/10 — Harshly given a penalty against, and was solid and full-blooded as ever, against a dynamic Israeli attack, but was beaten for pace a few times as well.

6) Hallur Hansson (C): 6.5/10 — The influential midfield and captain looked slightly laboured today and was taken off early in the second half.

10) Sølvi Vatnhamar: 7/10 — Got the crucial first Faroese goal but understandably looked tired and lethargic after a monumental performance against Denmark last Friday.

8) Brandur Hendriksson: 7.5/10 — Great shot in the build-up to the Vanthamar goal and the Faroese main attacking outlet (sorely missing against Denmark). A couple of sloppy passes in possession, but he can be forgiven for the dynamism and vision he brings the side.

14) Jóan Símun Edmundsson: 6.5/10 — Willing runner as always, with some impressive touches, but frustratingly things didn’t come off for Eddie tonight.

11) Klæmint Olsen: 8.5/10 MOTM (for Hallur Hansson, 52 minute) — Came on and changed the game, with an assist and greatly taken headed goal. Two games in a row, he has come on and had a massive impact on proceedings.

2) Heri Mohr: 6.5/10 (for Sonni Nattestad, 71 minute) — Got into some decent advance positions down the right-hand side.

18) Petur Knudsen: 7/10 (for Sølvi Vatnhamar, 80 minute) — Looked bright and busy and almost ran through for a one-on-one opportunity.

Håkan Ericson (Coach): 7/10 — The Faroese defensive frailties were yet again exposed (now conceded 23 goals in 10 competitive games). But massive credit for the attacking changes that transformed the game, and it was the first time in over 5 years that the Faroe Islands have scored two goals away from home in a competitive fixture (last was versus Latvia in October 2016). Perhaps Ericson was slightly naive to leave the set-up so open after fighting from two goals down to draw level. And Israel punished this by scoring again just two minutes later.

Regarding the match, defender Viljormur Davidsen summarised, “It was a good game from our side. Sadly Israel got a lucky penalty, and we followed our gameplay first half and said in the break after 10/15 minute in the second half, we changed play 442 to put more pressure on Israel. And we succeed with that! But we are disappointed that we lost the game when we bounced back in that way! And Petur got a big chance when it was 3-2, with only 5 min left! But like all this tournament, we don’t have the small markets on our side.”

And defender Hørður Askham commented: “I was disappointed because we had a result, and then we concede a goal again late in the match, and end up losing. It seems like it keeps repeating that we concede goals late in the matches, and it is frustrating and disappointing. But we score two goals, and we are stressing them, so that’s positive.”

The Faroe Islands finish the 2022 FIFA World Cup qualification on four points from 10 games and fifth out of six nations (above Moldova). Sadly it is now time for another international break, until March when a double-header of friendly matches will take place.