HomeBusinessFrom Okkara with beer - "We stand ready to take on the...
Business

From Okkara with beer – “We stand ready to take on the world,” beams brewery CEO 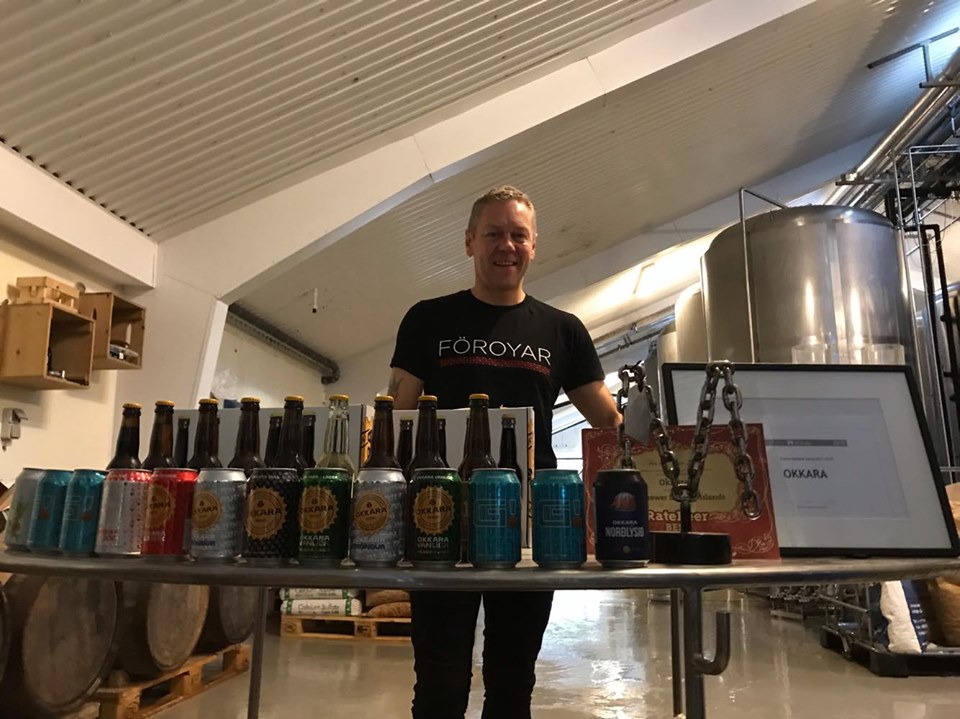 After a couple of difficult years following its startup in July 2010, Okkara, one of the two Faroese breweries, is finally ready to take on the world.

In the last few few years, the brewery of choice among Faroese hipsters, located in Velbastaður on the southwest coast of the island of Streymoy, has launched a number of new beers, including Mikkeler Gullhorn and Okkara Norðlýsið. This week, on the eve of the annual LGBT pride march, the craft-oriented brewery is ready to release “Okkara Pride”. And later this summer, on the eve of Ovastevna, a local festival on the island of Nólsoy, the brewery will also release “Okkara Ovi”. In 2018, the brewery – which makes mainstream beers, seasonal beers as well as special beers – was named the best brewer in the Faroe Islands by RateBeer. Hence, it is certainly fair to say that things are indeed looking up for Okkara.

Which is quite an accomplishment given the company’s recent turbulent history.

Setting up a brewery on an archipelago in the middle of the North Atlantic, with Føroya Bjór (the other brewery in the country) being the old-established firm was a bold and ambitious venture, which nearly went all wrong. Luckily, it did not.

“We seriously considered to close down our business a few years ago, but in 2016 we decided to make a fresh start and, consequently, we created a 3 year plan. Now, here we are in 2019, and it is going really well now, like never before,” says Petur Petersen, the very likeable CEO of Okkara.

So, what has changed for the better for the company that initially started with the ambition to create something completely new on the Faroese beer scene?

“Since day one, we have specialized in brewing craft beers,” says Petur, adding “it was a pioneering plan at the time of starting the business, but it takes time to gain people’s trust, and maybe that is part of the reason why we found it so difficult the first couple of years.

“We still specialize in brewing craft beers. But after having initially put emphasis on giving our beers a bitter taste, we have latterly toned down the bitterness, and lately our beers have definitely reached a higher level, quality-wise, as we have become much better brewers over the years. Secondly, we have also become much better at collaborating with concerts and festivals, including the G! Festival to name one, and that has really given us a lift and a new foothold. Thus, we have eventually managed to finally gain people’s trust, I think.” “When it comes to alcohol, people nowadays typically prefer beer over hard liquor. And during the summer months we always see that expats, who come back to the islands for holidays, choose to buy craft beers. So that is a really good thing for us,” says Petur.

Who is locally known as Petur Øl, or in English Petur Beer (yes, that is also an Okkara beer).

“Okkara means ‘ours‘, and I would say that our future looks very bright at the moment. Our story proves that persistence, as well as the willingness to sometimes step back and learn from one’s shortcomings and lay down a new plan, really can pay off. We are now ready for the future, and I really wish and hope that we can make our customers happy for many years to come,” Petur concludes.

Okkara Portari: A stout with a blend of malty flavours rooted in pilsner, coloured, caramel and smoked malt.

It finishes with a hint of liquorice, making it an excellent beer to have with deserts and other sweet foods. Chocolate and cream-based deserts truly come into their own when combined with our caramel colored stout. Okkara Tróndur: This beer is amber in hue with an energetic and rich flavour. A touch of malted sugar balances the bitterness. Mixed with the bite of the alcohol it has a distinctly refreshing flavour.

Okkara Rinkusteinur: A top fermented ale that is aged with porous Faroese rocks. The rocks are heated to 800°C and then placed in the wort, where they then caramelize the brew. This process, combined with the specially selected hops, creates a unique spiced flavour.

Okkara Rinkusteinur pairs best with dark meats, such as lamb, but it also combines wonderfully with cheese platters and other high-fat foods Previous articlePRINCE will sail on the route to Suðuroy
Next articleCan the Faroes Save Themselves?