As of 1 June 2019, the Faroe Islands total population stands at 51.783, an increase of 864 people compared to the preceding 12 months, reports Statistics Faroe Islands (Hagstova Føroya).

According to Statistics Faroe Islands, the Faroese population has grown from around 48.000 people in February 2014 to almost 52.000 people in June 2019.

The Faroese population has never been higher than it is today.

Political scientist Súsanna Olsen says a major shift in the narrative surrounding the Faroe Islands has influenced how people perceive the country.

“Ten years ago, young people were asked ‘What are you doing here?’, because the Faroe Islands used to be a last stop, a last resort,” says Súsanna. “But within the last five to ten years, it is now much cooler to live here. One reason is that we are now more objective, more neutral and more positive in our narrative of the country,” Olsen told Faroeislands.fo.

Súsanna cites a number of pull-effects that have positively influenced immigration and emigration numbers, such as the high conjecture in the economy, a good welfare infrastructure and a growing tolerance between groups of people.

“Our economy is booming which means there are job opportunities, and we have a good welfare infrastructure that includes a high standard of day care centres, schools and other services that a modern society has,” she says. “The Faroe Islands are also a much broader and tolerant society now. That gives a mental ‘free-space’ that is much more evident today compared to a few years ago.” 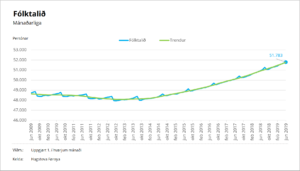