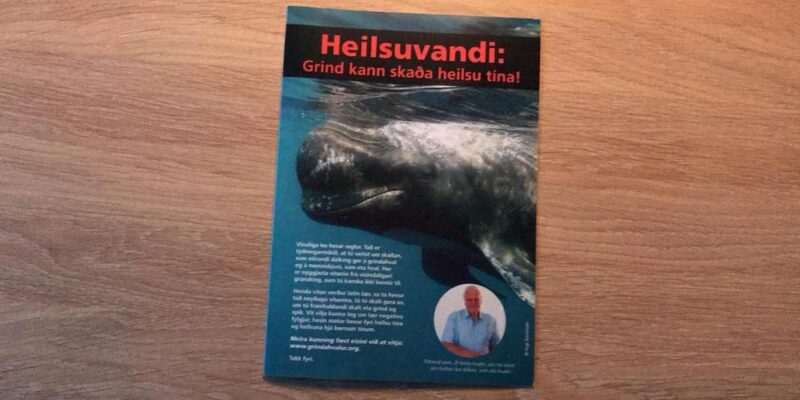 On January 1st a billboard advertisement was erected in central Tórshavn to highlight the threat posed by industrial poisons, both to the whales and the people that consume whale products. It recommends people eat more fish, and not pilot whale, for a healthy life.

This has been followed earlier this week with a public information brochure that has been delivered to every Faroese household. It provides up-to-date factual information on the dangers posed by toxic pollutants that concentrate up the food-chain into the whales and the people eating whale products.

Dr. Pál Weihe, Chief Physician at the Department of Occupational Medicine and Public health in the Faroes has raised his concerns on this issue many times over the past 30 years. He believes that pilot whale is not safe for public consumption and his views on the dangers posed by these toxic contaminants are supported by international scientific research, the organization states on its web page.

Grindahvalur has also produced a movie called ”Grindahvalur” which Sir David Attenborough introduced at its premiere in 2016. The movie highlights the grave threat of pollution to whales and people.

According to Grindahvalur.org, Attenborough argues that ”while hunting the pilot whale has helped the Faroese survive a harsh environment over countless generations, the very same poisons that threaten the whales now threaten the people eating them.

But there is no need to end the Faroese’ special relationship with the pilot whale, but simply redefine it: For these incredible animals can still provide for the Faroese through whale-watching, rather than as food, in a way that will help sustain both whales and the Faroese far into the future”, Attenborough argues.