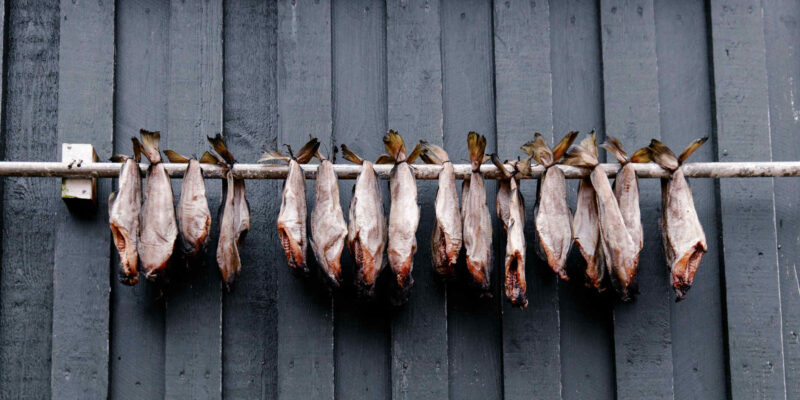 Nature has blessed the Faroe Islands with excellent raw materials for food. Throughout history, the Faroe Islanders have developed a cuisine deeply rooted in the need to make full use of everything nature has to offer. A heritage that contemporary chefs are building upon.

The Faroese are descendants of the Norsemen who settled the islands during the Viking era. Faroese cuisine dates back over a thousand years, all the way back to the “landnám” period.

The climate on these remote, windswept and sea battered islands, limited the variety of crops that could be cultivated, so even though the Faroese did grow some root vegetables and grains, they relied mostly on farming sheep and cattle, small scale fisheries, hunting for birds and collecting eggs. The rough environment could make daily life a struggle and at times hunger would strike.

Faced with the unpredictable nature of life on the islands, it was crucial to take full advantage of all available sources of food. This created a cuisine that is based on utilizing every part of the animals raised or caught and also on preserving the food for winter and harder times.

The art of ræst – the North Atlantic umami

Up to the 1800’s, salt was a scarce commodity in the Faroe Islands and so it was not common to salt food. Trees do not grow naturally on the islands, so the Faroese didn’t have the kindling needed to smoke food either.

However, with the cold climate and salty ocean winds, the Faroese found a way to preserve both fish and meat. A skill and an art form that is the basis for the taste which the Faroese call “ræst” (fermented).

Ræst is a process where fish and meat are hung to ferment and dry outside and in slatted sheds called “hjallar”. The open slats allow the wind to pass through and steadily dry the meat or fish. Being hung to dry like this starts a maturing process that ferments the meat.

The ræst taste is highly dependent on the weather. Too warm and the meat or fish will spoil. Too cold and the fermentation process stagnates, rendering the product tasteless. It is therefore important to know just the right time and place to hang the meat or fish up to dry.

This method of preservation has several stages and each stage has its own nuances and traits. The result is a unique and powerful taste that is the embodiment of umami – the rare fifth basic taste.

There are three main stages to this preservation process. First there is visna, which is a state that occurs after the first few days. Then there is ræst, when the meat is fermented and semi-dry. Lastly there is turka, where the meat is fully dried. Fully dried lamb is called skerpikjøt in Faroese and usually hangs to dry for up to nine months.

Drying food is also useful as regards transportation. Vikings used to stock up on dried fish for their long journeys across open oceans. When a fish has been dried, the moisture evaporates and the meat decreases to about a fifth of its original size. Left is a mass of nearly pure protein that is light and compact – the ideal durable provision.

Even though these traditional preservation methods are no longer strictly necessary, they are widely used in the Faroe Islands.

Modern means of preservation and the increasing number of imported foods have not diminished the desire for the taste of ræst. The ræst taste is a cornerstone in Faroese cuisine and Faroese gourmet chefs have embraced it. Ræst has put the Faroe Islands on the gastronomic world map.

The Faroese are blessed with excellent and tasty foods. Fish in Faroese fjords and waters hail from the cleanest marine environments in the world and the rough streams around the islands give them strong muscle tissue. The cold temperatures mean that fish and shellfish grow and mature slowly, giving them a rich and defined taste.

Faroe Islands means Sheep Islands and sheep have a central part in Faroese culture. Faroese sheep graze in the mountains all year round. They traverse the mountainous terrain developing their muscles and building up a firm and tender consistency and rich taste.

Despite the fact that the climate and soil do not lend well to agriculture, the Faroese still grow some crops, including potatoes and roots, such as turnips and carrots, but also vegetables such as rhubarb. These grow slowly in the cold ground, giving them plenty of time to soak up nutrients and develop a rich taste.

For more than a thousand years the Faroese people lived from husbandry, fishing and catching birds. A proud tradition of hunting and farming developed, with a focus on the skill and knowledge to fully utilize resources on land and in the ocean.

Part of this tradition has survived and remains integral to Faroese society today. The Faroese still have a strong connection to nature and value the community bonds this connection provides. A large percentage of the Faroese people are partially self-sufficient in food and still farm, hunt and fish in their spare time.

Sheep husbandry is still popular and highly valued, both as an occupation and a hobby. People from all sectors of society gather to take part in the necessary communal activities associated with keeping sheep, such as shearing, rounding up and slaughtering. Many Faroe Islanders own boats which they use to fish for themselves and their family.

In recent years a gastronomic scene has emerged and developed in the Faroe Islands. New restaurants have opened to serve both Faroese people, as well as the growing number of tourists that have had their eyes opened to the Faroe Islands and its food culture and cuisine.

Innovative and daring Faroese chefs are driving a trend, based on ancient food traditions and locally sourced produce, that has made Faroese food culture worthy of high-end restaurants. Reinventing traditional dishes in creative ways has generated attention both at home and all around the world. International media has even named the Faroe Islands the New Nordic Food Frontier.

In 2017, the hugely popular restaurant KOKS was the first Faroese restaurant to be awarded a Michelin star, bringing the burgeoning interest in Faroese gastronomy to a whole new level. In 2019 KOKS was awarded a second Michelin star.

KOKS has created a brand that is based on the passion of Faroese chefs for singularly characteristic Faroese food traditions and makes the most of their access to local produce that is some of the best in the world.