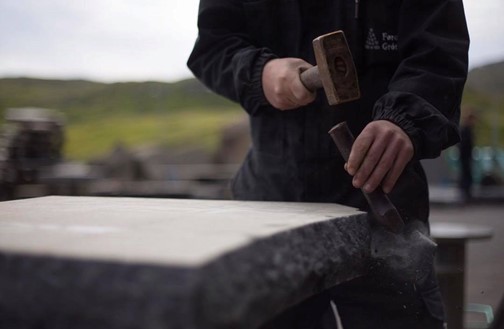 Since brothers Heini and Høgni Tausen bought Føroya Grótvirkið in 2013, they have mainly sold their products – made from Faroese basalt – to Faroe Islanders. Last month, they sold several polished table tops to Greenlandic trawlers that are being built in Spain. The brothers hope this order will result in more interest in their products from abroad.

Føroya Grótvirkið, called Basalt Art in English, is a stone quarry and stonemasonry where huge rocks are converted into tombstones, tables and small objects for everyday use. It is located in the village of Skopun on the island of Sandoy.

Basalt is a dark, fine-grained volcanic rock that sometimes displays a columnar structure. It is used in construction (e.g. as building blocks or in the groundwork), making cobblestones (from columnar basalt) and in making statues. Heating and extruding basalt yields stone wool, said to be an excellent thermal insulator.

According to Heini, Faroese basalt has a unique quality.

“Basalt in the Faroe Islands has the perfect texture for polishing and producing, for example, gravestones, house coverings, tiles and table tops,” says Heini. “Basalt is softer than, for example, granite, and, therefore, does not break as easily.”

The Faroe Islands are of volcanic origin and are made up of three layers of basalt, with the top and bottom layers resembling each other. The age of this rock is between 54 and 58 million years, with the oldest material at the bottom.

The 18 islands were built during a period of a few million years, some 55 million years ago, in early Paleogene times, when Europe and Greenland started to separate, opening up what became the Northeast Atlantic Ocean. Countless numbers of volcanic eruptions built up a huge basalt plateau that covered almost the entire Faroe-Rockall region, together with the south-eastern part of Greenland. In simple terms, each basalt lava flow of today’s Faroe Islands represents one volcanic eruption during that time period.

“A unique layer of basalt runs through the Faroe Islands and can be found in Tórshavn, Kirkjubøur and in Skopun,” says Heini. “That’s why Føroya Grótvirkið is located in Skopun.”

Basalt is found all over the earth, but it is also found on Earth’s moon, on other planets, such as Mercury, Mars and Venus, and on meteors.

Previous article‘Psycho-gate is not a political matter,’ declares Republican Party leader who believes that Mr. Speaker and Ms. Fríðriksmørk will eventually kiss and make up
Next articleVideo: Driving sheep of house roof