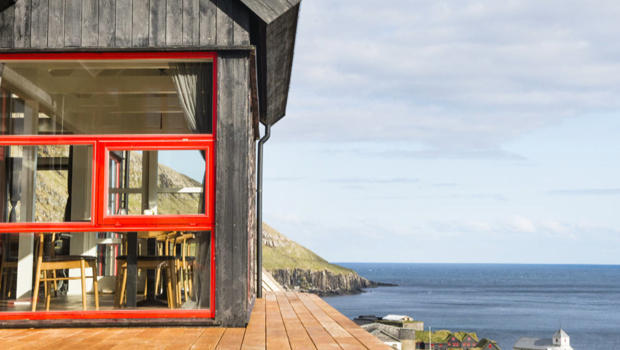 In his latest round of Island-hopping, Conor Knighton from CBS News has leapt across much of the North Atlantic to the Faroe Islands as last year, for the first time ever, a Faroese restaurant brought home a Michelin star ”to a small house, in a small village (i.e. the village of Kirkjubøur), on the side of a hill”.

Poul Andrias Ziska, the head chef at KOKS — a 23-seat restaurant with one heck of a view – said of his Michelin star, “It was so unexpected. I did not think that they will come here this early on.”

Many of the ingredients Ziska cooks with are found on the rocky shores down below his dining room. “Right now we’re just gonna grab this seaweed here and use it for a sauce,” he said.

In the Faroe Islands, where most of the food is imported, Ziska was determined to stay as local as possible.

“You become much more aware of your surroundings when you have to kind of source the ingredients from around,” Ziska said according to CBS News.

After the Michelin announcement, foodies have started coming from all across the world just to taste Ziska’s cuisine.

“There are people that will book a table at Koks before they actually book their flight to the Faroe Islands,” said Levi Hanssen, who works for the Faroese Tourism Bureau in Tórshavn. “So, it’s definitely been something that’s had a great effect on tourism in the Faroe Islands,” he contintues before Conor Knighton concludes:

”The Faroe Islands may not stay secret for much longer. And, where the scenery is still the biggest selling point, it would be hard to imagine a better ambassador than Ziska’s food. It reflects the land he loves — each dish a little postcard, on a plate”.

KOKS announced in January that it will move from its current location in Kirkjubøur to a remote valley by Leynavatn, a mere 20 minutes’ drive from the capital, Tórshavn. The new KOKS will open its doors on April 10.

KOKS retained its Michelin star in 2018.