HomeSportsFaroe v Spain preview: 'Catenaccio is our only hope'
Sports

Faroe v Spain preview: ‘Catenaccio is our only hope’ 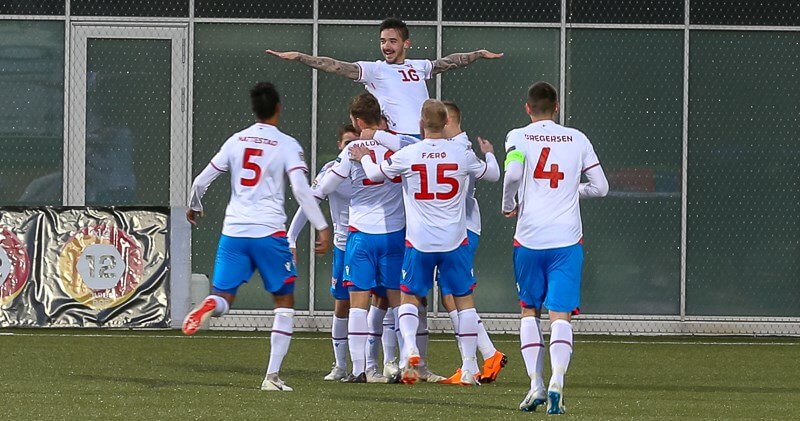 As the recent Faroe Islands squad was announced for the upcoming home fixtures against Spain and Norway, something prominent stuck out: this will be the first squad in 8 years which has not included the significant figure of either Gunnar Nielsen or Jóan Símun Edmundsson (due to injury). The last time this occurred was the 7th June 2011 to be precise.

Which as far as suspicious omens stand are in good stead, this was the famous 2-0 win over Estonia.

Such paramount loses will still hugely weaken the team however, and the last round of fixtures hugely exhibited how impaired the Faroe Islands are without Edmundsson influential and skillful style. Another surprising absentee is Sonni Nattestad, arguably Faroe’s most talented defender, whose progress has sadly stalled, in part to a less than fruitful move to FC Fredericia. This leaves the Faroe Islands devoid of a defender with raw pace to track runs in behind the backline.

The man destined to deputise for Nielsen in goal is HB goalkeeper Teitur Gestsson, and any watchers of the Faroe Islands Premier League will know he is an able replacement, who played a huge part in helping HB become league champions last season.

Positive results are not expected against ex World Champions Spain, or the ever improving Norway, but a resilient performance, and respectable scoreline will go along way in adhering Lars Olsen to the Faroese peoples hearts again. On top of this, when ever playing at the atmospheric Tórsvøllur Stadium, there is always an air of optimism, and hope of glory exuberating from the Faroe faithful, a majestic energy, which on its day can be a great leveller on the pitch .

With all this in mind, here is my line-up for the games against Spain:

As mentioned above the admission Gestson due the Nielsen’s injury is self explanatory. The same goes for the back 4, identical as previous fixtures. The first surprising player in my team is Heini Vatnsdal in the defensive midfielder role, in favour of Baldvinsson. In my opinion in recent months, Vatnsdal has been harshly left out of the starting line-up, and deserves a chance. After a stellar season with Fremad Amager (just missing out on the play-offs), Vatnsdal has shown his strong capabilities, and can seamlessly fit into the role and also drop back between the centre-backs as well.

Brandur Olsen, Rene Joensen, and Hallur Hansson (just off of being named Horsens player of the season) are automatic starters at present in the midfield, and I would give Meinhard Olsen a debut alongside them. After his strong start to the season with Kristiansund, Meinhard’s ability to cut in from the left hand side onto his dangerous right foot could be a real advantage for the Faroe Islands.

And finally up front, I would select Jakup Thomsen, after grabbing a goal in his last appearance against Malta, Jakup deserves another chance. Especially considering Edmundsson’s injury, and Klæmint Olsen’s uninspiring form at international level. Playing the isolated lone striker against a possession dominating side like Spain can be a arduous and tiring task, and Jakup is really the only Faroese option to have the energy for such a difficult job.

The world class players of Spain such as Ramos, Isco, Busquets and so many more are well known to any football fan. And in the greatest respect to the Faroe Islands, it could be argued that even a Spain fifth choice side could beat Faroe’s strongest. But the reason we love football is its unpredictability, and knowing no game is ever won on paper (for example France drew at home with Luxembourg just 10 months before winning the World Cup!!)

In order for the Faroe Islands to gain anything out of such a difficult fixture, we need to be organised and defensively strong. We must have two banks of four (defence and midfield), with Brandur Olsen and Thomsen pressing up to add some attacking impetus, and ensure we don’t drop too deep (otherwise it could look like a defence vs attack training routine). Thomsen will be isolated, and get little service, so his strong hold up player is crucial for any Faroese attack.

The only other realistic threat we have are from set-pieces, with Rolantsson’s long throw-ins potentially a problematic tool which most Spanish players are not accustomed to. The same goes for free-kicks and corners, which imperatively most be delivered with quality to ensure the Faroe side use there aerial threat.

In all honesty a Catenaccio approach is the only method to ensure Spain do not run away with this game, and long-balls might give these Spanish players something of a culture shock. It may not look pretty, but it is our only option.

Any fan of the Faroe Islands national team know its never a boring journey, so who knows what 7th of June will bring!!