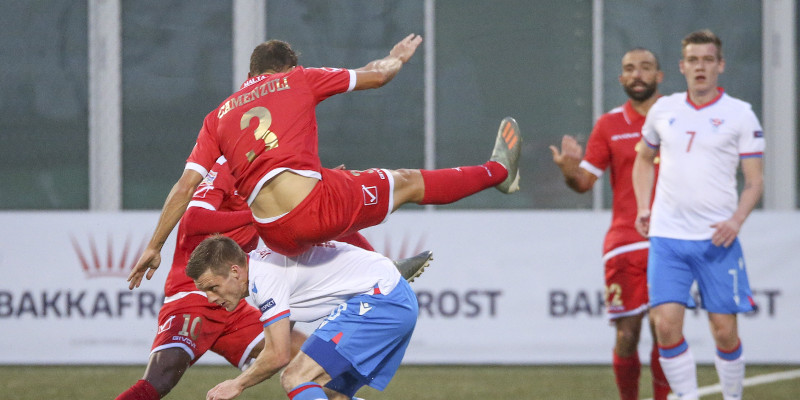 Hakan Ericson recorded a win on his debut match in charge, thanks to an exceptional free-kick from midfielder Brandur Olsen with just 1 minute of play left.

A breathless battle throughout, which was also the first match in 2 years that the Faroe Islands have scored 3 goals in a game.

A match in stark contrast to the scrappy affair the last time the two nations met 11 months ago, both sides played an open, expansive, high pressing attacking game, which meant exciting viewing for any neutral watching.

Ericson brought an ethos of high pressure, fluid movement, and passing between the lines gameplan. In an attacking 4-3-3 formation, which made for plenty of opportunities going forward (12 shots in the match), but on the other hand, also allowed Malta to have plenty of chances of there own (8 shots in the match). That will be a cause for concern going forward for Ericson. Who will be well aware that against better opposition, such open gaps will not go unpunished.

The Faroes dominated the first 20 minutes of proceedings, with

Jóannes Bjartalíð and Klæmint Olsen both guilty of missing glorious one on one opportunities. But on the 25th minute, Olsen redeemed himself, by getting on the end of an exquisite Vatnhamar cross, with a smart header beyond the goalkeeper, a justified lead for the home side.

This goal, however, seemed to spur the away side on, who got a deserved equaliser on minute 37 from Degabriele, who curled a shot beyond Gunnar Nielsen into the bottom right-hand corner. Malta’s dominance continued until half-time, and Nielsen did well to tip a 30-yard pile driver around the post.

The second half was a much more even affair, with chances at both ends, with the premium one being a near spectacular own-goal by Mbong, who smacked the ball against his crossbar. In the build-up, it was even debatable that the home side could have been awarded a penalty, with a late challenge on Meinhard Olsen amongst the chaos.

However, on the 73rd minute, Malta took the lead from a set-piece. Thanks to an Agius volley at the back post. Malta’s set plays were a constant danger throughout the affair, and the poor marking and organisation for the goal must have angered the new Faroese coach, as Agius was left with space the size of Torshavn to dispatch the cross.

With just 17 minutes left, the Faroe Islands were staring down the barrel of a humiliating loss in Ercisons first match in charge. And also one which would have been Malta’s first competitive away victory in over 7 years.

The introduction of Andreas Lava Olsen and Patrik Johannesen was a real turning moment in the tie, with there added height and aggression, giving the Faroes a direct, physical threat upfront. And it was Lava Olsen who restored parity with just 3 minutes to go, thanks to a brilliant shot on the turn into the bottom right-hand corner of the Maltese net. Remarkably this was also Lava Olsen’s first international game in nearly 4 years.

If you offered any Faroese supporter a point with 5 minutes left, they would have bitten your hand off, so the late leveller was a massive sigh of relief, but things would get even better. As the clock struck minuted 89, the Faroe Islands were presented with a free-kick, 25 yards out, left of centre. A hard distance and angle for any player in the world, but cometh the hour, cometh the man. And Brandur Olsen stepped up to curl a stunning effort right into the top left-hand corner, giving the languishing goalkeeper no chance.

Celebrations were rightly jubilant, with Olsen jumping into the main stand to screams and hugs from his ecstatic teammates. The only thing missing from such a beautiful moment was the roars of the Tórsvøllur faithful as the ball hit the back of the net (due to the match being played behind-closed-doors). But despite the irreplaceable Skansin not being allowed to attend and witness such a goal, the Faroese players and coaching staff sure did some justice with there joyful celebrations.

The 3 minutes of injury time were played out with relative ease. And victory was met with a massive sigh of elation, as a near defeat with just 7 minutes left, somehow turned into a triumphant Faroe Islands victory.

One must have a touch of sympathy for Malta, who really added to the match and put up a fine display, with the victory, cruelly snatched from under there hands, when they were in within touching distance. But there is little room for sympathy in football, and the Faroese population will gleefully take the win, and the fact it came down to a last-minute winner, makes it taste all that much sweeter.

Gunnar Nielsen- 7.5/10 A few smart saves from distance and had little chance with either goals.

Jóannes Danielsen- 7/10 The right-back was solid and battled hard throughout, without being spectacular.

Heini Vatnsdal- 7/10 Decent match from Heini, who is really cementing his place as a starting centre back.

Sonni Nattestad- 6.5/10 Couple of shakey moments for the big man, but great to have him back, after a 2 year absence from the national side.

Viljormur Davidsen- 8/10 Classy game from the undisputed first-choice left-back, defensively and attacking, and showed why his a Danish Superliga player.

Brandur Hendriksson Olsen- 9/10 Easily the best passer on the pitch, and most of the Faroes best moments came through him; his free-kick winner will also live long in the memory.

Hallur Hansson (C)- 7/10 Not the best match for the rightly named new national captain, but he was full of running and endeavour as always. Will have better games with the armband for sure.

Sølvi Vatnhamar- 6.5/10 Glorious cross for the opening game, but looked uncomfortable in a deeper midfield role, was also booked for a sloppy tackle.

Jóannes Bjartalíð- 6.5/10 Got into some great positions, but missed 2 clear goalscoring opportunities, which is not acceptable at international level. Still young and new to the international game, so always a chance to improve that aspect on the big stage.

Meinhard Olsen- 7/10 First senior international start for Meinhard, and he did himself proud with some smart runs and drew clever fouls in tight areas. Unlucky to not be awarded a penalty in the second-half as well.

Hakan Ericson- 8/10 Set up an exciting free-flowing, fluid, attacking formation, with clear intentions to play out from the back, which provided enjoyable viewing, and allowed for several scoreable chances for the Faroe Islands, with exceptional build-up, linking and interplay. But also room for improvement defensively, as Malta scored 2 goals in a game for only the second time in 5 years, and the first time in a competitive away fixture since 2003. Furthermore, the Faroese team looked very vulnerable from set-pieces especially, something I am sure the new coach will be looking to rectify.

Dan í Soylu (25 minutes, replaced M. Olsen)- 6.5/10 Brought the side some much-needed energy, and nearly scored, but hard to get involved and play his game in such a physical finale to the match.

Andreas Lava Olsen (19 minutes, replaced K. Olsen)- 8/10 Fantastic finish from the bearded beast. Some eyebrows were raised with his inclusion in the squad but justified it with his cameo. 4 years away from the international fold, played like it hasn’t been a day.

Patrik Johannesen (11 minutes, replaced Bjartalíð)- 7.5/10 Denied a goal thanks to a wonderful save by the Maltese keeper. He also won the free-kick which lead to the winning goal, and his direct running and strength was a real thorn in the Maltese defence.

After the match, I spoke to newly named captain Hallur Hansson, and when asked about his thoughts on the game, said “We never gave up, and I can’t praise the team enough for that. I never let myself think about a possible loss during the game. As long as we have the opportunity to win, we’ll chase it, and fortunately this time we got a result”.

Next up for the Faroe Islands is Andorra away on Sunday, in which promises to be another enthralling encounter for the Landsliðið.