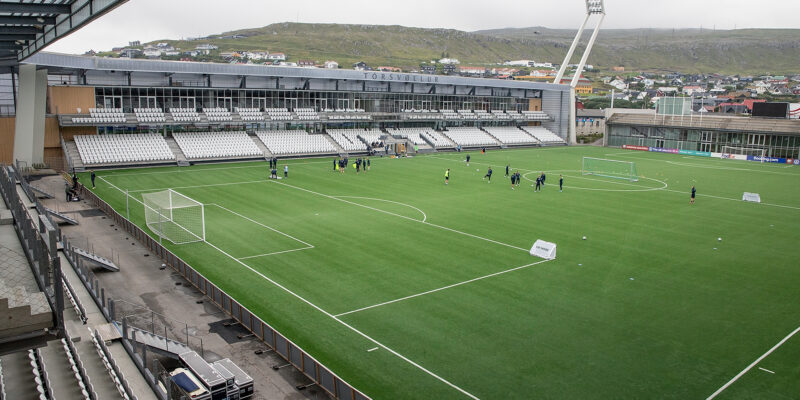 The upcoming match against Israel is the first of a treble header of home World Cup qualifying fixtures for the Faroe Islands. Israel at home tomorrow is followed by Denmark on Saturday and Moldova next Tuesday, a hectic, football-filled week ahead!

Coach Håkan Ericson had an almost full-strength squad to choose from before yesterday’s news that left backs Viljormur Davidsen and Ári Mohr Jónsson have to quarantine for ten days after being in contact with someone with Covid, and as a result, will miss all three upcoming matches. A huge blow considering Davidsen has been one of the Faroese strongest players over the last couple of years and further compounded by the fact that the only other natural left-back (Ári Mohr Jónsson) in the squad also has to miss out (how’s your luck!). In their place, HB Tórshavn left-back Daniel Johansen has been called up and is set to make his debut for the national side. The match may also see the debut of 6-foot 8-inch striker John Frederiksen, who has made a storming start to the season with Austrian second division side SKU Amstetten. Quite the heroic turnaround for Frederiksen, who was diagnosed with a brain tumour at the beginning of the year.

The Faroe Islands will be desperate for their first win against a Top 100 ranked opponent since the infamous home victory against Greece nearly seven years ago (November 2014). And will fancy their chances of challenging the inconsistent West Asia nation, who have been unpredictable over recent years.

Although they are slowly making progress under the strikingly named coach Willibald Ruttensteiner, who has taken them up 12 places in the world rankings to 81st, they are also well placed just outside the play-off zones in the World Cup qualifying groups after a win, draw and defeat in their opening three fixtures (told you they were unpredictable). Israel does have, unlike the Faroes, a full-strength squad to choose from. Key players include attacking trio, free-scoring attacking midfielder and captain Eran Zahavi, pacy Shakhtar Donetsk winger Manor Solomon, and clinical Hoffeinhim striker Mu’nas Dabbur.

Håkan Ericson has brought an exciting, free-flowing brand of football with him since taking the helm in 2019, including a record-breaking national victory in the last match against Liechtenstein (5-1). The Faroese public will expect this style of play to continue and the players to give a good account of themselves and confront Israel with Ericson’s positive high press tactics, especially on home soil. And despite Israel being a considerable step up in terms of opponents compared to Liechtenstein and heavy favourites for the tie, they still have consistency issues, which can be tested in the quest for a positive result.

Furthermore, if we are going to lose, we might as well lose with a strong football ethos and give it a go. As Roman poet Virgil said, “Fortune Favours the Brave.” In addition, a consistent style of football will leave the Faroe Islands in good stead for the long term.

In three previous meetings between the nations, Israel has won two, and the other ended in a draw. Can the boys tomorrow pull off an unlikely and famous victory?

The match will kick-off at 19.45 (BST) tomorrow at fortress Tórsvøllur, marking the first international match with a full allocation of fans since Malta at home in October 2019; it has been a long-drawn return for the Faroese public, who will as always provide vocal and faithful support to the team. It also marks the first international use of the swanky new west stand.