Faroe Islands lose without being outclassed 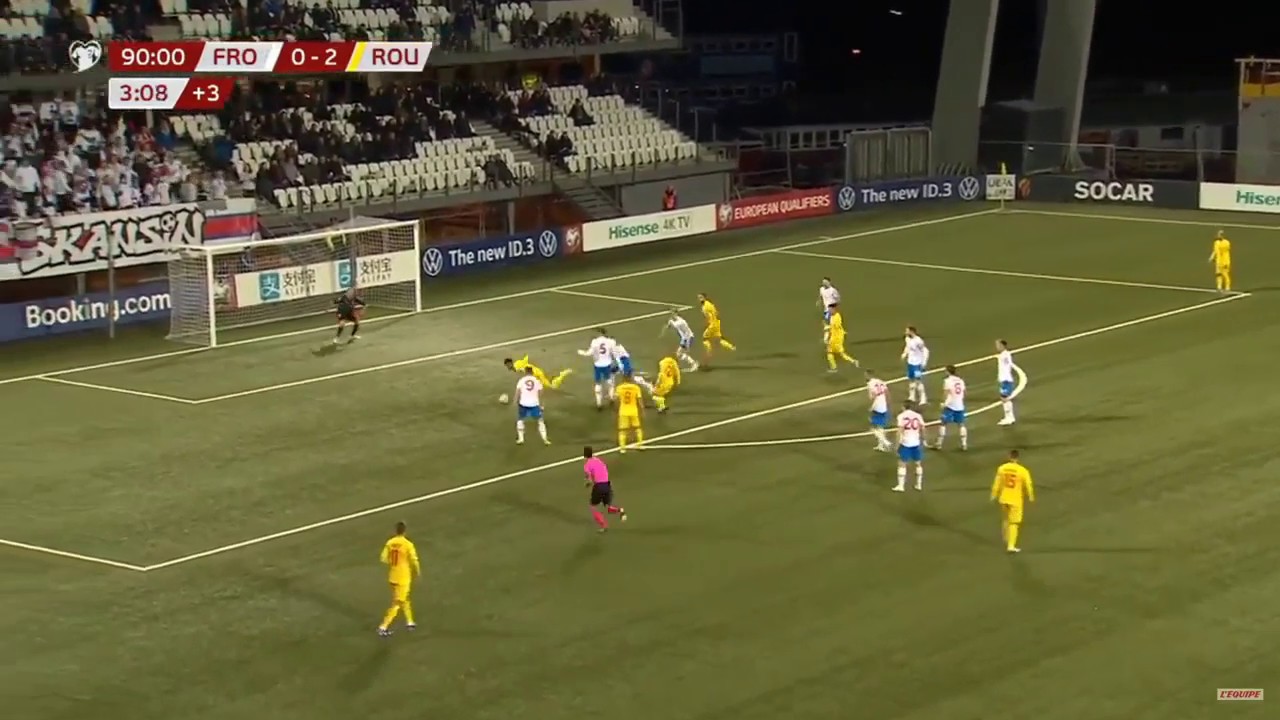 Uefa Euro 2020 qualifying group F, Matchday 7 : If you said before the match Romania would have won 3-0, in the Faroese current form no one would have been surprised.

But the Faroe Islands were level for 74 minutes of the match in a much-improved display.

In a goalless first half that saw the Faroese produce arguably their best defensive display of the campaign so far, the fans were reminded of the ability and potential of this organized and stoic side when they are on form.

Romania were limited to speculative long-range efforts, and the back three of Atli Gregersen, Heini Vatnsdal and Rógvi Baldvinsson were well structured, giving Romania stars such as Nicolae Stanciu and Ianis Hagi little time or space to work with.

Klæmint Olsen had the best chance of the first half, seeing his header tipped round the post by the Romania goalkeeper, showing evidence that when the Faroe Islands stick to their tried and tested compact tactics, which have been badly missing in the campaign thus far, they are a match for most countries.

Sadly, the Faroese could only hang on for 74 minutes, and thereafter Romania romped home with two further goals, and akin to Spain match, the final scoreline was very harsh on the Faroese. The match was never a 3-0 display, but the continuing problems were still evident.

Just three goals in 7 qualifying matches show the lack of threat in attacking positions, which is not aided by Jóan Símun Edmundsson‘s continued absence (he came on as a late substitute in this match due to injury). And with 23 goals conceded in 7 matches, the nation is now conceding an alarming 3 goals on average per match. Meaning the despite the better display, the defensive frailties are still apparent, as well as the theme of conceding late goals.

After the match, this correspondent spoke with a deflated Hallur Hansson, who said: “We are so disappointed because we feel like it was a close game, but we concede late goals. We have done that a few times now.”

On the reason behind conceding late goals, Hansson said: “It is hard when you are defending without the ball for so much of the game to maintain that for 90 minutes.”

On the subject of the upcoming match, Viljormur Davidsen inspirationally remarked: “It is a must-win game, and we are gonna do everything to win it.”

Previous article“When the new Culture Minister is calling the films we screen abnormal, he is calling me abnormal,” states creator of Minority Film Festival
Next articleSerious car crash on Eysturoy sends three people to hospital